This is twitch grass. (Photo from Wikipedia. Mine won't look like that for a couple of months yet.) 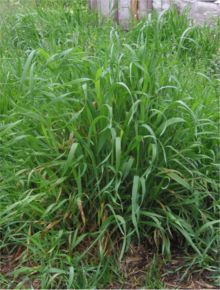 This is what mine looks like right now, after plowing and discing the garden.  A tangled mess of roots sticking out of the ground. 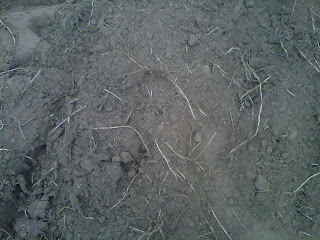 This is a 20 year old garden. Or older. It has been tilled or plowed every year. And the battle continues. Before I plant, I rake as much of the weeds and roots away from the section to be planted as I can.  Then I pull weeds throughout the season.  Endlessly. 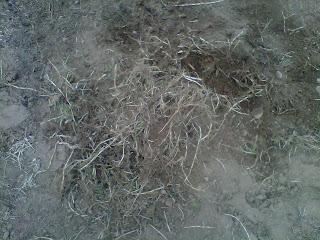 This is last year's pumpkin patch. I covered the area with cardboard, leaving only the tops of the pumpkin hills exposed. It does help keep the weeds down through the season, but after one winter there isn't much left of the cardboard, and the weeds are returning in full force. This section has not been plowed this year, and I will cover it again soon. 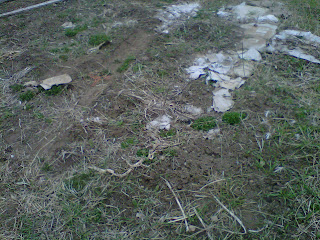 The Bigs skipped school yesterday. Apparently I worked them too hard on the weekend, and they weren't feeling well. At least that's what they told me at 6am. By noon they weren't behaving very sickly, so I put them back to work. If you want a day off around here, you have to go to school, lol. We got the peas in. It wasn't too labour intensive, just a few short post holes and a bit of hoeing. I had enough seed that I could have planted another row, but I only have two fences, and that is usually more than enough. If I get ambitious, I might plant the rest along the actual garden fence, or build another pea fence, but this is probably it. 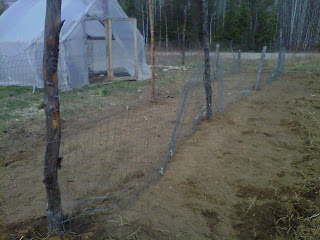 Peas like a frost, so they are fine to plant early. Actually, peas do okay with snow too. Actually, the only time I have trouble with peas is when it's hot and dry. So what other cold weather crops can I put in now? I have kale and broccoli started in the house, but I think it's too early to transplant them out. I might try a row each from seed though. Just for comparison.It's so hard to not go crazy and plant everything with this beautiful weather we're getting, but I know I will wake up one morning, it'll be -5°C or so, and then I'll have to start over!  Trying to contain myself.  Maybe I'll head back over to the perennial bed and entertain myself there for another week or so.  That would be the smart thing to do.
Posted by Wendy at 8:03 AM