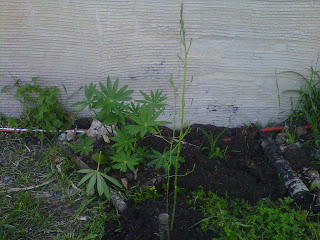 The asparagus in the perennial bed sprouted early. I assumed it was the black compost drawing in the sun, warming the earth earlier than usual. There's another bunch yet to come that doesn't have fresh compost and wood chips yet.

I went to see if there were any early arrivals in the garden patch (outside the garden fence), and was I ever surprised. 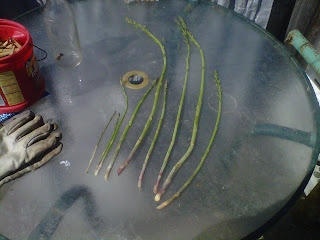 I left two stalks behind that were far too branchy to cut, and debated a couple of these as well. First fresh asparagus of the year, and earlier than the rhubarb for the first time ever. Wonderful!
Posted by Wendy at 4:25 PM