If you've been around here awhile, I'm sure you'll remember hearing me mention my Dad.  I think I talk about him a lot, because he's a huge part of my life.  Or at least he was.  Dad passed away two weeks ago, on May 16th.  It was sudden, and unexpected, and unfair, and too damn soon.  Stupid aneurysm. 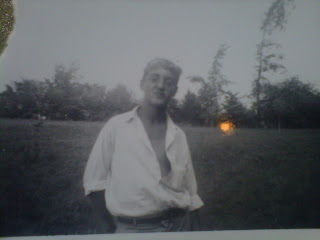 So I haven't been wring.  I haven't been doing much.  My heart is broken, and my head is stuck in a permanent fog.  My heart just isn't in it this year.  I do what I have to to get through each day, and I putter here and there.  Milk and cream sit souring in the fridge.  I can't get it together to make cheese and butter.  Dad's never going to taste my cheese.  The garden should be planted.  I barely spend any time in the greenhouse.  There's so much work to do, and I just want to crawl under a rock.

I want my daddy back. 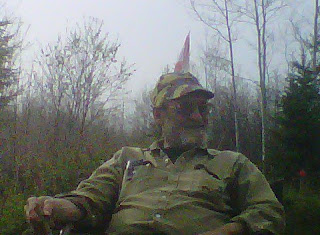 Posted by Wendy at 8:41 AM 9 comments: Links to this post

I haven't been posting much, because spring has finally arrived. Or summer. Or winter? In the past three weeks it went from warm spring like temps, to hot, hot, hot! The snow melted quickly, and we sweltered away. Yesterday the temps took a nose dive, with a high of 1°C for the day. I swear it felt like -20°C, since we aren't used to it anymore. Snow is in the forecast for the weekend, but I'm hoping that will pass by. Really? Winter wasn't long enough? Geesh...

At any rate, here's the update.  Nelly is fine.  #1 has been milking her- she has very sensitive teats and can be pretty kicky.  I went to the auction and bought her a calf. 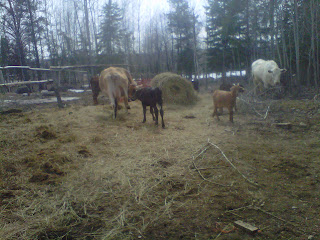 Well, four calves, actually.  I figured she could take her pick of the lot.  She chose 'piss off and leave me alone'.  They all tried to nurse at first, but she kicked them off quite violently.  Mildred, on the other hand, is not fussy at all, and allowed all of them to nurse as they pleased.  We're bottle feeding as well- I don't think even Mildred has enough milk for everyone- and slowly trying to convince Nelly to take a calf.

This little brown calf- Limousin- got sick.  Probably pneumonia, definitely chest congestion.  Even with penicillin injections we couldn't save him. 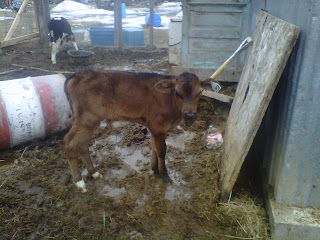 This black one- Holstein- is Mortimer.  He'll probably be our new stud.  He's doing really well. 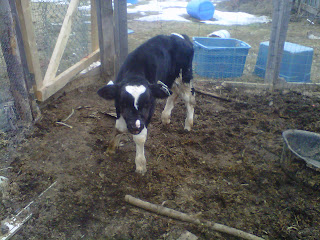 These two are Holstein crosses, and were Murphy and Morris.  Morris is now Maurine.  It seems that a certain boy still can not be trusted to make the ID.  He thought the Limousin was the girl.  Oops. 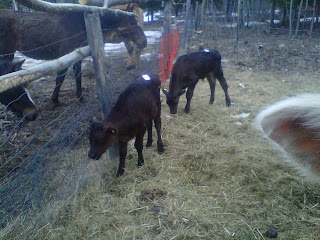 Maurine will probably stay and join the herd.  If I could convince Nelly to keep her, I'd let the two of them go out to pasture with everyone else.  So far Mortimer is having the best luck with nursing though.  We have to tie Nelly and coax the calves to come over to nurse.  After lots of bag balm and gentle coaxing, she has finally stopped kicking them constantly.  I think Monsoon (the original calf) may have gotten a hold of Nelly before she calved, causing the soreness and sensitivity.

The birds arrived on Wednesday.  21 new Bronze Orlopp turkeys (the dark ones), and 12 Muscovy ducklings are sharing one brooder, 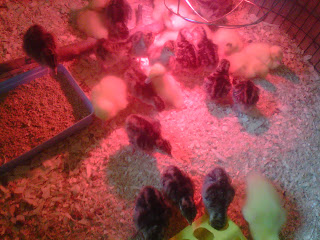 while 115 new chicks are in the other.  These are Frey's Special Dual Purpose, a slower growing meat bird.  The second set of four chicks that we hatched are in here as well.  They're just a little bigger than the new ones, and I had to steal their heat lamp from the basement to get this mob to spread out. 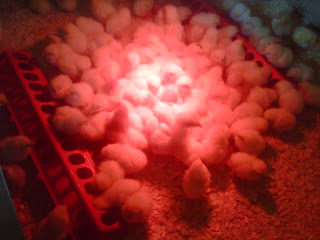 The first four chicks we hatched have been moved to a cage without heat.  They're fully feathered now, and could probably join the chicken coop, however they're still small enough to get through the fence, so I'm going to try to keep them caged for a bit longer.

The geese have been moved to the turkey pen, alone, in the hopes that they might decide to try hatching their own eggs.  No luck with the geese eggs in the incubator.  I cracked them all open, and none had started developing.  I don't think we have a mating pair.  Maybe they'll surprise me.

The incubator will be starting round three today.  In addition to the dozen or so eggs I have from our hens, I bought a dozen eggs from a neighbour that I'm going to incubate as well.

Firewood season has begun- slowly working myself into it.  I am so out of shape after such a long winter!  But we're gotten a few loads done, which is always nice to get early in the year before the bugs come out and the underbrush grows in.

#1 has tilled a few feet of garden so I can get the peas planted this weekend.  Husband hasn't plowed yet, as the ground is still frozen in spots.  I could probably start the greenhouses, but with this temperature drop, I think I'll hold off for a bit yet.

We're hauling water for the critters.  It seems the water pipe has burst underground, probably between the chicken coop and the barn.  Turning the water on in the basement drains the well in a matter of minutes, and won't fill a single water dish.  That will be a major repair this spring, first fencing off the area to keep the critters out, then digging down to the pipe to find the leak.

The pasture is finally greening up, so hopefully we'll only need a couple more weeks of hay.

Yard clean up, garden prepping, plants to start, firewood to gather, repairs to be made...  it's going to be a busy summer!
Posted by Wendy at 8:37 AM 4 comments: Links to this post