I don't post much about the cadet program, due to my overprotective privacy issues, but as I post less and less through the winter, I thought I'd give you a glimpse into how I spent my weekend.

Our Air Cadet Squadron, for which I am a Civilian Instructor, did a weekend field training exercise. We went to a summer camp, so there was real shelter, running water, working bathrooms, and a kitchen.  They are kids after all, so we don't throw them to the wolves.  Still, they learn how to set up arctic tents, which the seniors slept in on Saturday night, and how to build improvised shelters with logs, twigs, tarps, and string. 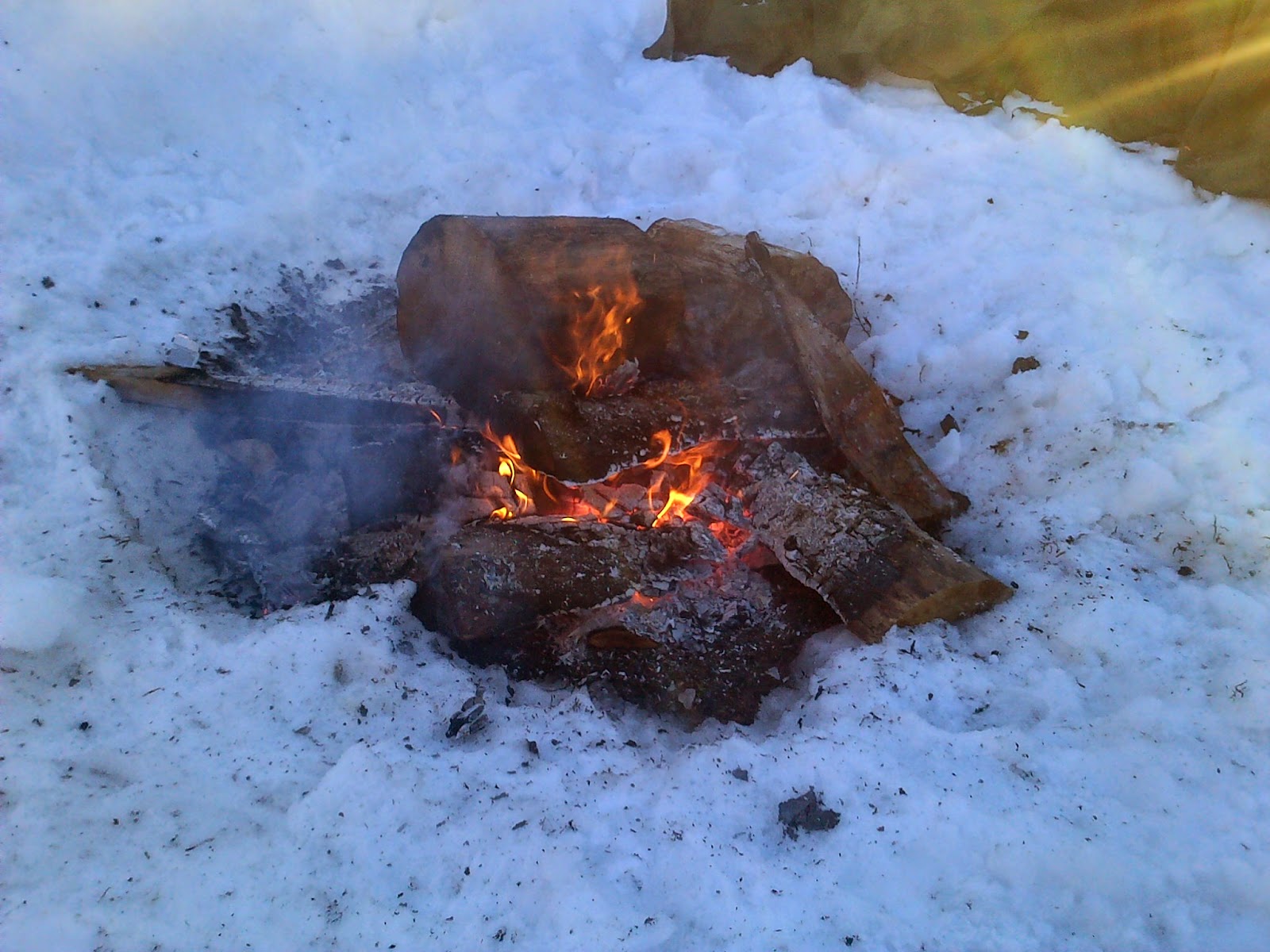 There were campfires in the snow, accompanied by songs, scary stories, and jokes.  The cadets learn how to use camp stoves and cook their own breakfast.  They go trekking through the woods on snowshoes, using compasses to guide their way. 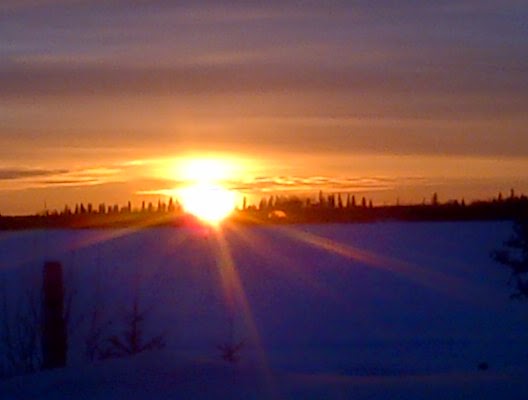 The sunset over the lake was beautiful. 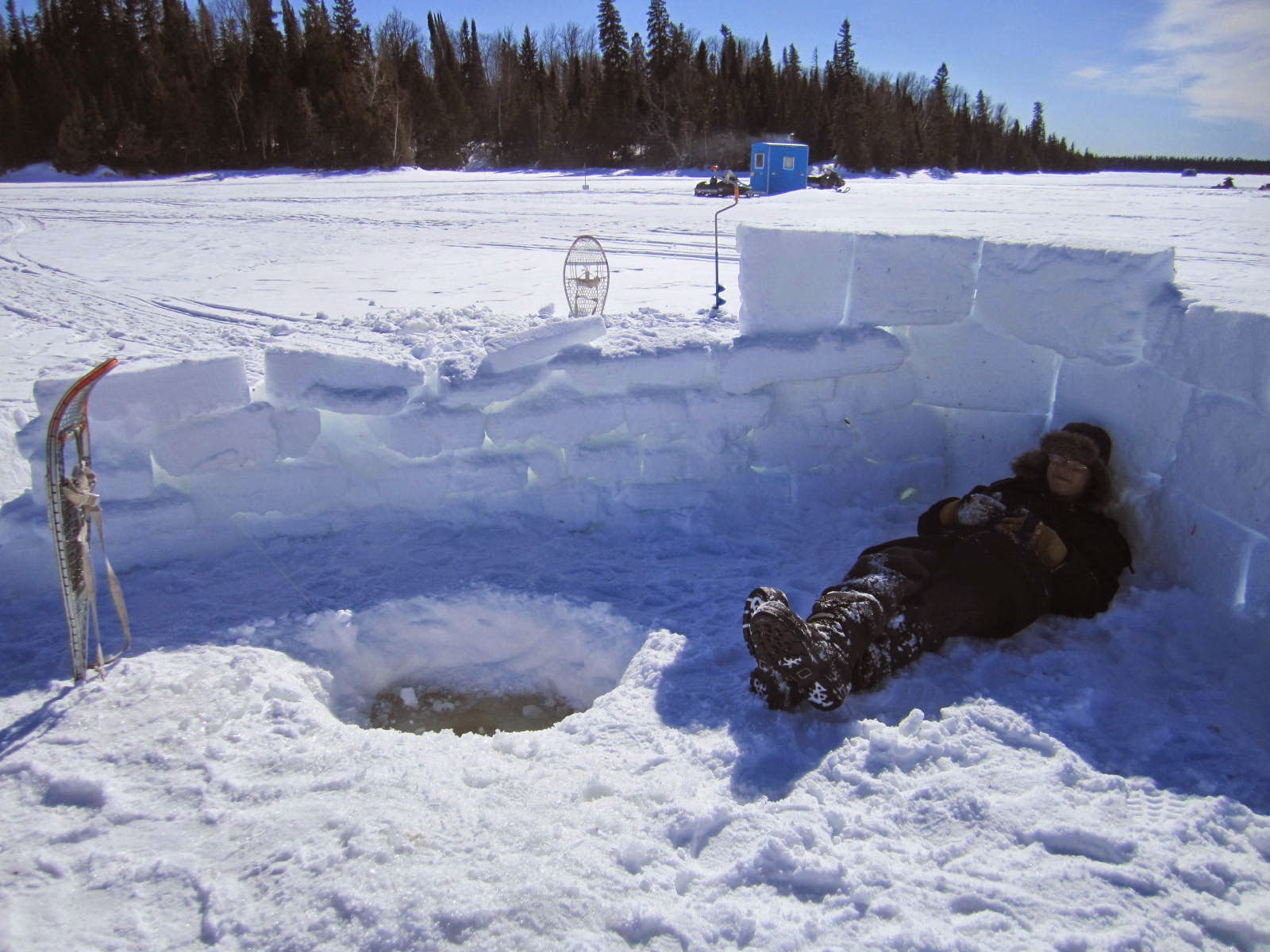 The cadets learned how to drill holes, built snow block walls for improvised shelter, tie lines, and ice fish.  That's #1 on his very last cadet trip.  He'll be 19 this Friday, and aged out of the program. 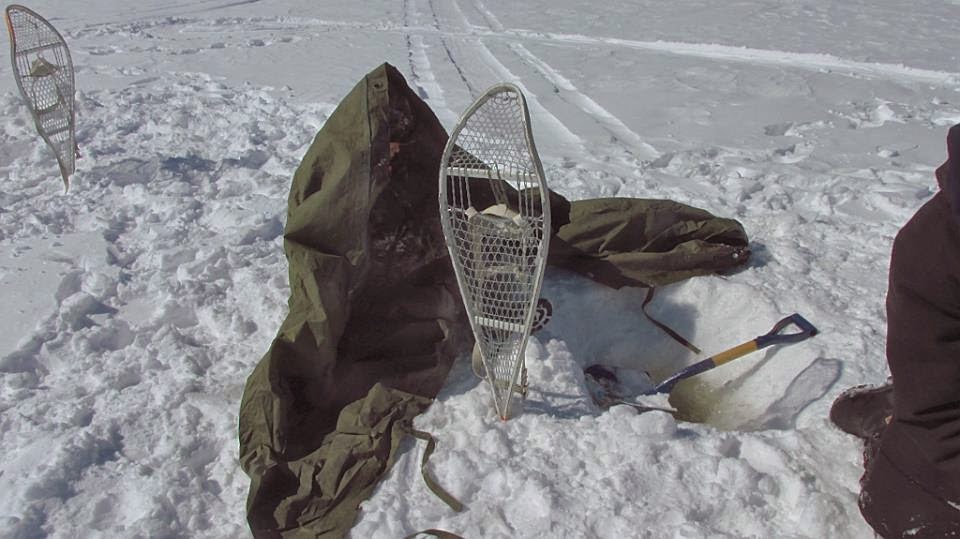 That's me under the tarp, doing a little fishing.  We never caught anything, but it was fun. 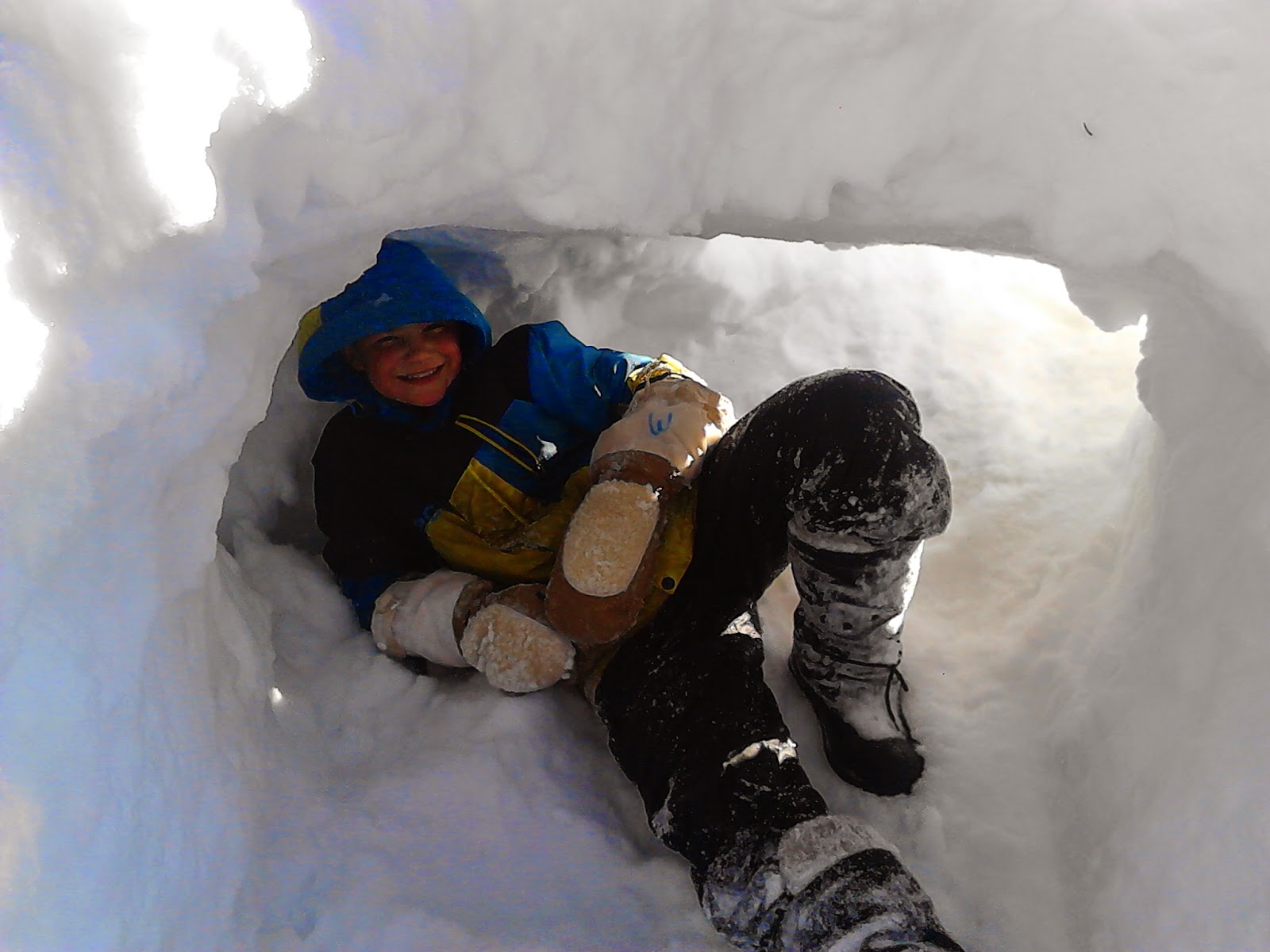 The cadets learned how to build a quinzee during our fall FTX, so were eager to grab shovels and get to work on the huge snow piles the ploughs had built for them through the winter.  That's #4 in the entrance way of one of the tunnels they dug.  This was his first cadet trip, having just turned 12 last week.

They had lessons on stargazing, and the opportunity to see Jupiter and several constellations in the night sky. 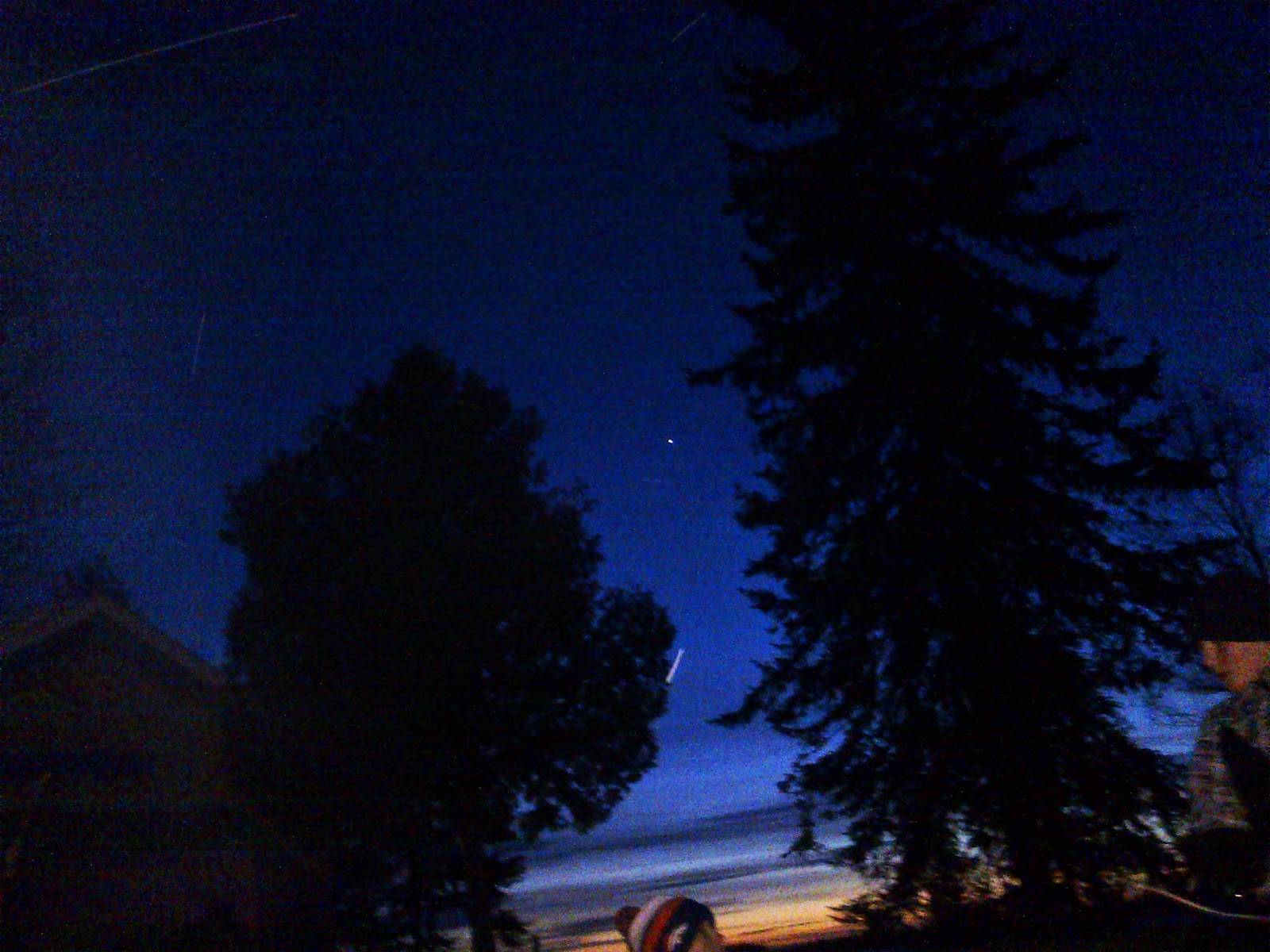 A busy, fun filled weekend for everyone.

Posted by Wendy at 8:10 AM 2 comments: Links to this post

It's not what most people would consider 'greenhouse' crops, however, it would give the corn the heat required to reach maturity, and the beans the protection they need at the ends of the seasons.

I already have plans for some beans and corn in other greenhouses, this would definitely give the push for those to be dry beans.

I figure a dedicated bean/corn greenhouse should equal 2 1/2 garden rows of beans.  I started planting 6 rows of beans due to our short seasons, which makes for back breaking work when they're ready, but most years gives me enough beans to last the winter, even if an early frost wipes them out after a couple of weeks.   I'd still plant a couple of rows in the garden, especially to start, but not 6- saving me space and time!

Corn, on the other hand, I only plant every few years when we have an early spring.  It's done well in the greenhouse before, in the shortest of summers, but I'm rarely willing to give it that much space.  3 rows of corn would be more than I've EVER harvested before.  The prospect is rather exciting...

A new area for vines means I can finally plant the Red Seeded Citron.  After reading a bit more, it seems that it's simply the ancestor of the watermelon, basically the white around the rind, except all the way through.  I already make preserves and jam from watermelon rind, and it's not a favourite here.  They may not be worth the effort.  I'll try them this year and see how it goes.

Greenhouse #5 next year?  Hmmm...  More tomatoes?  More beans?  Am I out of crops that require shelter?

I'm still debating adding a few peppers to the bean rows in Greenhouse #1, but I'll wait and see how many extra pepper seedlings I have to deal with first.  For now, I've added radish, onion and corn to the Pumpkin patch, and Nasturtium, Sunflowers, radish and peas to the Watermelon row.

I moved the Romaine to the front and back edges of the greenhouse, not because it serves any particular benefit to the pumpkins and watermelons, but because it can be finicky in my northern garden, so I want some in the greenhouse.

Now I am debating in my head- if I plan for Greenhouse #4- what would I plant in it?
Posted by Wendy at 8:00 AM 2 comments: Links to this post