Let the count down begin. 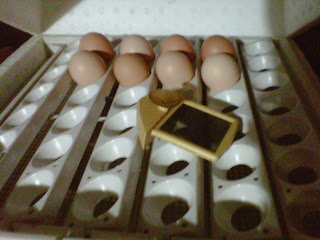 Just eight eggs in the incubator this round.  I put a towel over it to stabilize the temperature somewhat. 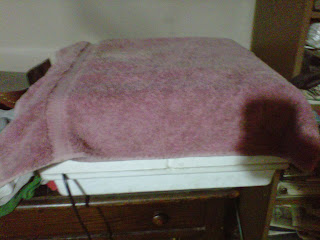 With the nights still so cold, I couldn't get the temperature to stabilize without it.  The towel is helping substantially, however, it's also covering the vents, so I'm not sure what that will do to the humidity level.

I decided to keep enough eggs for breakfast, and give it a go with the remaining eight.  Not too much to risk.  With a little luck, we could have chicks for the first day of spring.
Posted by Wendy at 5:25 PM 3 comments: Links to this post

Nothing new here, just a copy for my records before I wipe out the little side bar.  My record keeping was bad last year, especially at butcher time.  We butchered one female calf and two smallish pigs.  Our neighbour also dropped off a bit of venison, since he had more than he needed.  This is what I tracked though, so here it is.

I'm not wiping the medicine chest off the side bar, just continuing to add to it as I create/harvest/prepare additions.  I'm just posting it here in case I should wonder when I added something at some point in the future.

Chickens in the Basement

When the chickens started started dieing, we built a temporary home for them in the basement.
It's just the space under the stairs, about three feet wide and 10 feet long.  There was a pole conveniently located from ceiling to floor in the corner, which made sectioning the space off very simple.  We put in a little door way and wrapped the whole thing in plastic.  Plastic of course, is not the best for ventilation, however it does protect the birds from the smoke that escapes the fire box.

Normally this space is reserved for overnighters- large pieces of firewood that we don't split, used to keep the fire from going out over night.  They had to be moved before we could bring the chickens in.

The plastic is held in place by firewood at the bottom, and stapled to the top of the stairs and wall at the top.

Surprisingly, with just the four of them, it really doesn't smell.  I give them a coffee can of fresh shavings every two or three days, and that seems to be plenty to keep the smell down.

They made an escape a couple of times, the door wasn't closed properly and they were roaming loose in the morning.  That was messy.  They seem to have gotten into everything.

They don't currently have proper nesting boxes, just a cardboard box on the floor.

They'll stay inside now until the grass starts growing in the spring, or the temps at least stabilize over night.

As I mentioned in the comments the other day, Tori, coming from the south, took two years living in the north to grow a proper winter coat. We were lucky that those winters were milder than this one.
It's hard to see, but her fur is just as thick and long now as Knightmare and Shiloh's, who were born and raised in the north.


Toothless, lean and sleek through the summer, becomes a furry beast in the winter.
He's a holstein cross, bottle baby from the auction.  Again, we were lucky.  His first winter was much milder.  Last winter was harsh, but not as bad as this year.  He has adjusted to life outside in the great white north.

Nelly was born furry, and keeps a fairly thick coat even through the summer.
And then there's Dorie.  She's another furry beast, although she loses her thick fur coat in the spring.
The funny thing about Dorie- we don't really know what she is.  We know she's a beef cow, a crossbreed, probably Limousin, but those horns just don't match up with any of the common beef breeds in the neighbourhood.
Cranberry, my sister-in-law, has a cousin who lives in my area, and they raise Scottish Highlands.  When I added her to facebook, she looked through my pictures and commented about Dorie being part highland.  Hmmm...  Well, then...  If the horn fits...

Highland cows are well suited to northern winters and poor pastures.  They eat more scruff and browse than typical cattle.  So you'd think I'd want to jump in with both feet, right?

Their meat also has a taste of it's own.  I can't really explain it.  Some people say it's more gamey.  It doesn't taste like any deer or moose I've ever eaten though.  Slightly lamby?  Maybe goat-like?  I've never eaten goat myself.  At any rate, not my preference.

Mind you- the most delicious beef I've ever tasted, was Dorie's calf, Casper.  His Daddy was angus.

This furry little beast is the future.  She looks little in the picture, but Nelly's a good 50 feet or so behind her.  She's a big little girl.  Her fur is long and thick.  She's at least 1/4 holstein and 1/2 beef. (Toothless' and Dorie's daughter).

My only explanation for Sheila surviving this winter is her age.  Her fur is a little thicker, but not very long.  She looks great, just about ready to kid.

Posted by Wendy at 9:38 AM 2 comments: Links to this post

The cold came early, most of November and December ran in the -40°C range.  Weeks and weeks of freezing bloody cold with rarely a day in the tolerable -30°C range.  January was worse to start, then got a little better, then worse again.  More of the same for February, until this week.  We're at a balmy -9°C now.

You'd think with all the cold, we'd at least get a break from the snow.  But no, no luck there either.  More snow this year than we've had since we moved up north.  Many of the old timers say there hasn't been this much snow in 20 years. 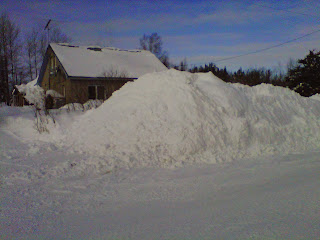 The cold and snow and wild life took it's toll on the livestock.  When two of the calves disappeared, coupled with numerous prints, I assumed wolves.  The next two calves froze to death, no doubt about it.  We found their bodies.  We'll see if we find the bodies from the first two when things melt in the spring.  That's all my bottle babies and Mugsy, Mindy's calf.  The only survivor (touch wood) is Majesty, Dorie's calf.

We found Mildred lying in the middle of the barn.  No signs of trauma.  Just dead.  Again, I assume it was the cold.

Mama took sick and died.  Max froze to death.  Mary Jane broke one horn, then the other about a month later.  She died a few days after that.  I think one of the bigger critters may be responsible for injuring her.  Sheila is the lone surviving goat.

We moved the three surviving meat hens and 1 rooster to the basement in December.  All of my other hens and the chicks I hatched last year died.  One goose and 2 roosters remain outside.

Wonder suffered severe frost bite and we put her down.

Winter depresses me on a good year.  This year, it's been over the top. 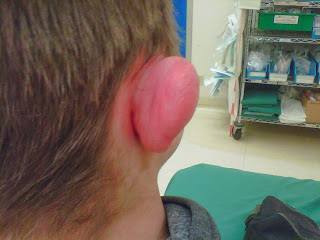 #4 got freezer burn- a form of frost bite that's like a third degree burn.  The picture is three days after it happened, with the swelling down to about half the size it was.  He had to go to the hospital everyday for treatments with flamazine for almost two weeks.  We got lucky and he didn't get infected.  He's looking pretty good now, ears back to normal size, but he'll remain highly susceptible to frost bite for the rest of this winter, and still increased likely hood for the rest of his life after that. 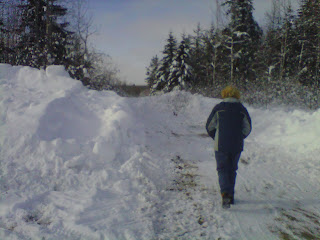 Loggers have been working the bush behind us, and decided to pile the snow from the end of the logging trail down our trail, blocking it off.

Snow banks on the sides of the road have been pushed back again and again and still look huge.  Flooding is expected in the spring.

The one good thing this year was that #2 and #3 made the biathlon team with cadets. 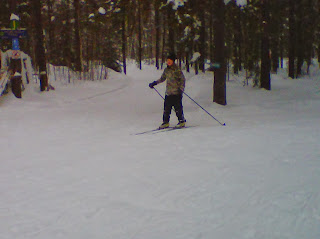 They've been practicing skiing and shooting regularly.  I've been volunteering more with cadets and may become an officer.  I got to go to the regional competition with them in Sault Ste Marie.  It was too cold to ski.  Seriously.  They had to do an indoor range competition, and a physical fitness competition instead.  My boys didn't do well this year (first timers), but our girls won gold for the relay team, and one of the other boys one gold individually.  The provincials went better weather wise, and one of our girls is going to nationals in March in Nova Scotia!

#2 is totally hooked on skiing, and continues practicing for next year.  He's cut his time in half.  #4 is getting a head start learning how to ski now.  I decided to give it a try too, and despite the fact that it's an outside winter sport, I kind of like it.  I'm really, really bad at it, but still, I kind of like it.

We're almost out of firewood and will probably need to start cutting in March to get us through the rest of the winter.

Spring will probably be late.  I haven't started any seedlings- not even tomatoes.  No ambition.  Greenhouse 1 is going to need new plastic.  The back side is pretty much shredded.

Thanks to everyone who has popped in and said hello.  I haven't been in the mood to write much.  Winter sucks.

Posted by Wendy at 1:15 PM 9 comments: Links to this post