Wild in the Woods 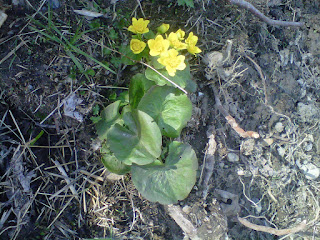 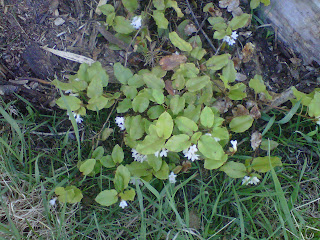 Found on Trailer Lake Road, at the base of mature pines in the shade. Transplanted to perennial bed. May 14, 2012.  Possibly Anemonella thalictroides (Rue anemone). 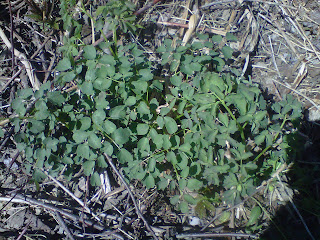 Found on the Dow Road, on the edge of my property.  It looks familiar, like something I had planned to keep an eye out for when I saw it listed in the herb catalogues...  May 17, 2012. 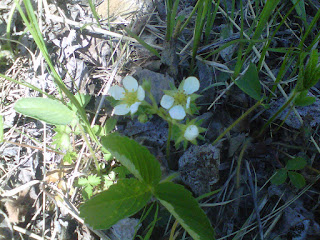 Wild Strawberries  Found everywhere, but this patch is on the Dow Road, on the edge of my property, about 100 feet north of the creek.  May 17, 2012. 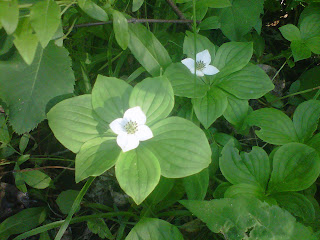 Little white flowers, 4 petals, over 6 green leaves, found along our trails.  June 19, 2012. Bunchberry.
The berries are edible but somewhat bland. Some say they taste mildly of apple. Regardless, bunchberries are among the best berries for inclusion in homemade jelly and an excellent addition for with other sweeter berries that would need pectin added to set up.

Cow Parsnip, found in the turkey pen and raspberry patch.
Edible leaves and stems in spring.  Cow parsnip Heracleum lanatum has been used medicinally. The root for toothaches (placed directly to the area) or you can also use a tincture of the root or seeds, it is less irritating to the gums than cloves. The root and seeds are used as an antispasmodic to the intestinal tract. If used in a tea, make sure it is dried first, the tea is used for nausea of a persistent nature, when you have not yet vomited, as well as acid indigestion and heart burn according to Micheal Moore in Medicinal Plants of the Mountain West. The seeds tinctured are effective for stomach aches, the dose should be one or two drops. Do not use this plant during pregnancy or nursing.

Wild Sarsparilla
Simmer roots for tea. Sassafras has been used as a spring tonic and blood purifier. The leaves were eaten raw or cooked, and the dried root was used for making tea.  The root is collected in late summer and the autumn and dried for later use. A drink made from the pulverised roots is used as a cough treatment. A poultice made from the roots and/or the fruit is applied to sores, burns, itchy skin, ulcers, swellings etc. A homeopathic remedy made from the roots is important in the treatment of cystitis.  A jelly is made from the fruit. The fruit is also used to make wine.
Found on the trail to Mom's.

Rose-twisted stalk; also known as Rose Mandarin, Rose Twistedstalk; perennial.
The fruit is edible, although bland and purgative. It is juicy and may be eaten raw or cooked.
The leaves and young shoots may be eaten in a salad. The young shoots may also be made into a creamy soup.  If berries are consumed in quantity, diarrhea symptoms can result.
Found on the trail to Mom's.
Fireweed
Early shoots can be eaten raw or lightly cooked.  Harvest when the leaves are still close to the stem and pointing upward.  Snap off at the base.  Young leaves can be pinched off and eaten like spinach.  As plants age they becomes very fibrous and unpleasant to eat.  Flower buds are edible and make a colourful addition to salads. Leaves are harvested for tea around the time the plant flowers.
It is a gentle, yet effective anti-inflammatory that helps conditions including diarrhea, stomach and intestinal inflammation.  Tannins in fireweed act as an astringent.  By improving the tone of the colon, it slows water from being reabsorbed and can act as a mild laxative.   It has antifungal properties and also helps to normalize the flora of the gut.
Found in the ditch near Dow Rd.

HARVEST: Roots are taken in autumn and used raw or dried for decoctions.
Used in Chinese medicine for hemorrhage, malaria, and pulmonary ailments. Also used for animal poisoning.
Found on Dow Rd.
Found on Dow Rd., just past the creek.

Gravel root, reflects its main use as a diuretic used to treat urinary infections and stones (gravel). Traditionally taken as a tea made from the roots. 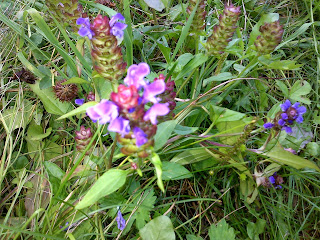