Going home to trailers with no hydro meant we needed to replace our solar system right away.  And building a new house means we get to integrate solar right into the construction.  So it was time to go semi-big. 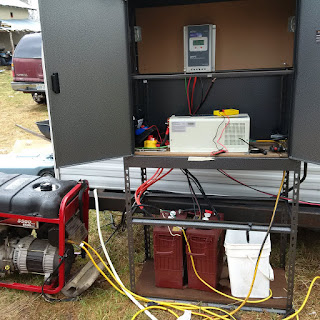 The smaller camp starter kit I had purchased a few years back is no longer available.  Camp starter kits that are available now are mostly smaller than what we had, to charge a phone or a laptop.  Bigger systems cost big bucks.  Ridiculous mostly, for what you're getting.

We found the local solar guy and purchased the kit pictured above, set up.
The panels are two 250 Watt panels.  We put them on the roof of the trailer.
The charge controller is a 30 amp Epever Tracer
The inverter is a Royal Power 3000 watt pure sine wave inverter.
Batteries are Trojan L16E-AC  (2 6Volt cross wired to make a 12Volt)
Cabinet and wiring were included.

So...  Right off the start, this guy wasn't making sense to me.  I do not understand electricity.  It's not hard to lose me.  But his answers to my questions were extra confusing.  And he kept pushing the Delco (generator).  Don't let your batteries drain completely, charge them with the Delco...  He couldn't tell us how much power the two panels would produce, or how long they would take to charge the batteries.  Just plug in the delco...

But, the price was better than the other kits we were looking at.  And we didn't feel quite ready to piece it together on our own.  So we bought it.  A little over $3000.

He wired the battery and solar cables into the charge controller backwards.  He used big fat cables from the charge controller to the batteries.  They didn't fit in the holes, so he cut them down and twisted them up.  He took twice as long to get it ready as he said it would.  And supposedly he "tested" it to make sure everything was working.

Husband accidentally touched the cables together somehow when setting it up at home.  The charge controller should have stopped the surge, but it didn't.  Fried the board in the inverter.

Took it back for repairs.  Should be under warranty.  Waiting for parts to come in.

Solar guy told us we had to find the 12V switch in the trailer and shut it off so that the inverter wouldn't be charging the trailer battery.  We fiddled with the fuse panel, called him about 6 times, offered to pay him to come out and help us...  No go.  Eventually we wired the trailer battery back to the system batteries, because it wasn't working any other way.

The first two days were sunny.  Batteries were doing ok, but not gaining.  We figured we'd be adding on more batteries and solar panels anyway, so not too worried.  Day 3 was cloudy and overcast.  No charge.  Husband sees the same readings as the previous days.  Figures out the wires are backwards.  Fixes them.

We start getting some charge into the batteries.  Trailer battery keeps draining.  We buy two more deep cycle marine batteries (We lost 2 in the fire, one was just for solar, the other was wired into our solar, but actually for our boat).  On sale, under $300.  We replace the trailer battery.

The batteries can hold enough power for our current needs for a couple of days, but they aren't charging properly.

We go to town on a beautiful, sunny day, come home expecting to be all charged up...  Nada.  The negative wire from the charge controller to the inverter fell out of the hole.  Husband puts it back in.

Picked up the big inverter ($400 for repairs - but it's a trade with a different one because the parts for ours still aren't in).

Three more days of snow/rain/cloud...  We're using the generator a lot.  It's not a Delco.  It sucks up gas worse than my car.

The negative wire keeps falling out, every other day or so.  It's driving us crazy.  Husband thinks someone is messing with the system.  Locks it up.  It falls out again, and again.

I do some research.  We don't need big fat cables there, just the same size as the cables from the panels to the inverter.

We buy new wire.  Rewire it.  New wire fits the connectors properly.  So far so good.  (knock on wood!)

So...  Don't believe you can't figure it out on your own - you're probably going to have to anyway.  Buy the parts, piece it together, save money.

A couple of things I forgot;

Good things;
Propane;
Lighting;
We charge the lap tops, portable DVD players, phones, tablets, tool batteries, etc, through the day.  If all goes well, we still have enough power in the system batteries to keep the heat/fan/fridge running through the night.  (The fridge has a 12V automatic electric start which is really annoying).  If not, we run the generator for a bit.

Everything gets shut off when not in use, day or night.  I know that's logical, but it's a big deal.  It's more than leaving the lights on when you leave the room.  We shut off the tv/dvd player before.  Now we also shut off the power bar that they're plugged into.  We shut off the internet modem whenever we're not using it.  That's new.  We use the internet a lot.  There always seems to be somebody doing something, so we never shut it off before.  Computers we only used to shut off at night - sometimes.  Now it's all the time.  It takes a lot of getting used to, especially for the boys.  If they forget to plug in in the morning, they aren't allowed to charge after dark.

After dark electronics are only in use until the internal batteries die.  Read more books.  Go to bed early.  Build a model car.  Play a board game.  Find something to do that doesn't suck up the power.

It's not bad, just takes a little getting used to.

Living in a Trailer

It's a little tight.  I haven't filled all of the available storage space yet - under the benches and bunk bed.  That's space for things that we don't need every day - mostly stuff on sale, or found at yard sale/thrift stores that we'll need/want in the new house.

Clothing was tricky at first, but not since the boys got their trailers.  We have rubbermaid bins on the top bunk for our stuff that won't fit into the tiny bedroom cupboards.  The boys are using a variety of cupboards in their trailers, and the kitchen drawers for socks and underwear.  We all have under bed storage space as well, so that's where the winter wear will go soon.

Kitchen storage is tight.  There's never enough space for dishes, pots and pans in a trailer.  We covered the sink with a piece of wood to make extra counter space.  I wash dishes in a rubbermaid bin - outside when it's nice.  We're using the bottom bunk as a pantry, as well as the laundry hamper.  TV tables to hold the crockpot, and to use for laptops. 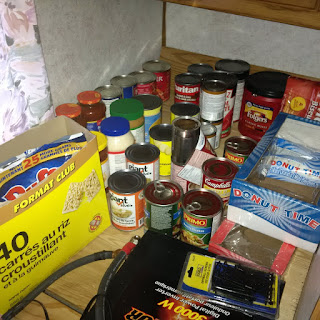 The fridge is not bad, except that the door only holds little jars.  I buy in bulk, so learning to shop for just a few days at a time is hard, and then buying the smallest jars available is a pain.

We will put a real fridge in the hydro shed in the summer, and maybe a small freezer.  Then I can shop for real, and refill those tiny little jars for the trailer fridge.

We've been using water jugs up until now, as we did not have hydro to the well until today.  The trailer water pump may require more batteries/panels.

Washer/Spin Dryer - Will be set up outside the shed, drain on the ground.  No more laundromats.  I'm not sure what the wattage is, or if I could run it on solar- again I didn't even check.  It will be easier for water at the hydro shed, so that's where it's going.