Even though we had snow on the weekend, I think it's fairly safe to say that spring has finally arrived.  There's a lot of melt going on, so I moved the geese out of the winter coop. 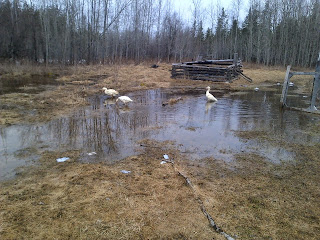 There's a bit of a flood between the raspberries and the 'turkey' pen, so for now I'm leaving the gate open to let them play. 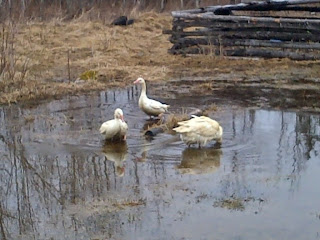 They were so happy splashing and dunking in the water. 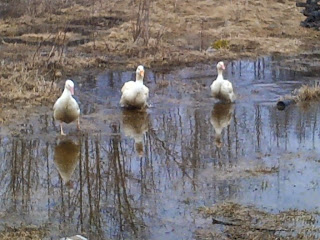 And maybe, if we're lucky, they might decide to give us a few goslings.  There were two eggs in their pen yesterday morning. 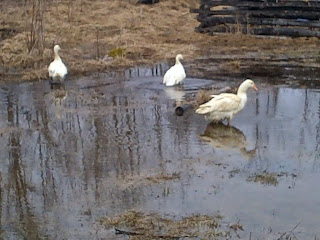 We know we have girls, but do we have a boy?  Fingers crossed!

The chickens will be staying in the winter coop for a while yet.  The weather is still pretty cold, I still have too many roosters, and they're laying so well I don't want to disturb them right now.  We still have a fair bit of snow to melt away along the ditches and tree lines, so it won't be too long now until I get started butchering those birds!
Posted by Wendy at 7:27 AM 2 comments: Links to this post

Two at a Time

Spring is in the air.  The snow is melting.  The days are getting warmer.  The nights are staying above freezing.  And this is when, not one, but two- TWO!- of my freezers, decide to kick the bucket.  And not just any two, of course, but both of the big freezers.

If you've been reading here for awhile, you know I usually empty the garage freezer and unplug it in the spring.  Then it gets a good cleaning and sits ready for fall.  I can handle the loss of one freezer.  We've made room in the other two over the course of the winter.  But TWO...

Well, everything had to come in the house.  The little freezer was close to empty.  All of my homemade butter was finished off this winter, we had eaten all of the meat, and only a small box of veggies and assorted breads and buns remained.  I had planned to empty and unplug the little freezer soon.  I thought I could make do with just the large entry way freezer this summer, and cut the hydro bill just a tad.

Breads and buns were thrown out onto the table.  The boys brought in all of the meat from the entry way and garage.  I have a surprising number of roasts and steaks left.  Roasts were piled in the bottom, along with two hams and a turkey, steaks on top, odds and ends all around.  We managed to get almost everything in.

What we didn't manage- several meals worth of ribs that I generally avoid cooking, the doggy stew meat bucket, another small box of fruits and veggies, and some frozen juices.  I am not a rib lover, but they take up a lot of room with all of the bones in them, so they were the first thing to cook.  I've had my two biggest stock pots cooking on the stove, alternating with the pressure canner. 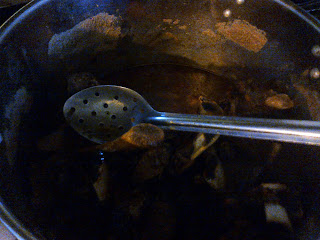 Today I'll also be canning the doggy stew meat.  The boys have been given free range on the juices.  The fruits and veggies- mostly rhubarb, dandelion greens, and bananas- went out to the chickens.  When the 'emergency' items are taken care of, I'll chop, cook and can some of the roasts.  That's partially for 'convenience' summer cooking, partially to make some room in the now overstuffed freezer.  I don't normally can meats, but since I am out of ground beef I figure this will be easier than defrosting and grinding through the summer.  I'll cook very few roasts as roasts in the crockpot through the summer, so most would just sit in the freezer until next fall anyway. 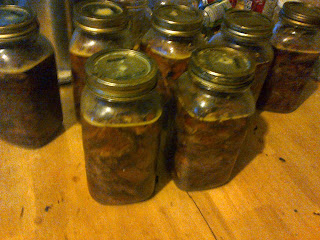 So now I have calves about to calve (milk!), 8 roosters and three hens to butcher, and spring greens to begin foraging, with no freezer to put them into!!

I started checking the local ads last night.  There are a couple of good deals for used freezers, but there's another wee problem.  The trailer is blocked in the second driveway behind 6 feet of snow.  We never plowed it this year.  Do I really need a new to me freezer bad enough to shovel that?  Waiting for the snow to melt seems like a better option for now.
Posted by Wendy at 5:38 AM 1 comment: Links to this post

Well, there you go folks, another pro for the Chanteclers.

I went out to the coop yesterday to do chores and there were NO eggs.  Ah well, with only two old girls laying, every day can not be an egg day.

As I fed, watered, relocated an ornary rooster who jumped the wire, I noticed two of the younger hens settled into two of the nesting boxes.  I didn't think much of it- I wasn't even hopeful.

And then, as I went about tossing in grit and oyster shell, one of those younger girls hopped out of the nesting box.  Look what she left behind! 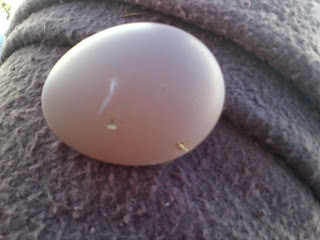 I did get one small egg back toward the end of January, I think.  I figured it was a 'fart' egg.  I've never had pullets start laying in the middle of winter, regardless of age.  Those chanteclers:  trickster northern hens!

I now have this sudden urge to go out and buy a bantam rooster.  If I could get these girls to set their own eggs, they would be the perfect chickens for a northern farm.
Posted by Wendy at 8:00 AM 2 comments: Links to this post

The Rest of The Chickens 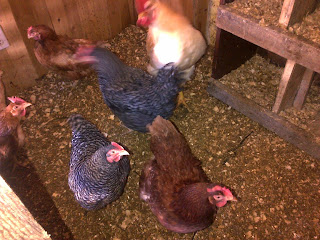 The older mixed girls- Barred Rock, Rhode Island Red, unknown, red, and meat hens- are showing feather loss, frost bite damage, and are definitely stir crazy.  They continued to lay through the winter, so I will keep them for eating eggs. 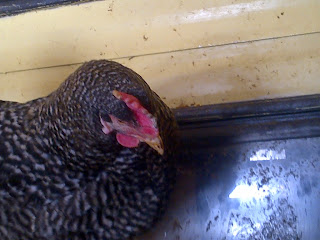 Frost bite damage was not severe on the wattles and combs this year, but there are three hens with lost toes and lameness.  I'm not sure that there's anything I can do about that, as it probably happens over night on their perches. 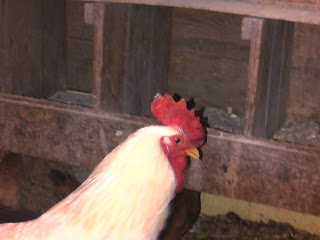 I do believe I've achieved the right body count to room size for the hardier birds, so now it's just a matter of weeding out the less hardy birds. 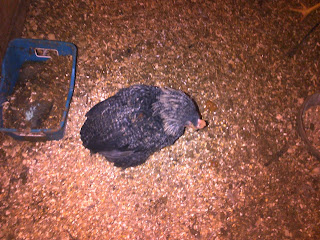 This is one of the lame hens.  The other is a red.  I'll be butchering them before the others go outside. 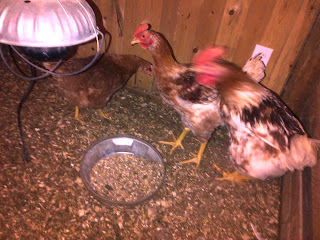 There are a few younger reds and a black that I will keep for eating eggs this summer.  They seem to have made it through the winter unscathed, they just aren't what I want for breeding.

There are 8 roosters who need to go in the freezer.  Most of them are the same colour and weight as the Frey's special dual purpose roosters that I had last year, and should be good eating.  Three of them are red and lighter (two in the picture above).  They may need a bit more time to bulk up.  I'll move them outside with the eating egg hens once the snow melts.

My plan for now is to have 30 potential chantecler cross hens for next winter, and two roosters.  Of course I'll probably have chicks too small to butcher or sex yet in the fall, but I'll deal with them when the time comes.

Posted by Wendy at 8:00 AM 2 comments: Links to this post

We moved all of the whites into one pen.  There were two roosters in with them that I moved out.  One was an original rooster, the other an offspring, both with large combs and wattles.  There are 13 whites total now, including at least two younger roosters with smaller combs and wattles.  There might be a third rooster with even smaller comb, or it might be a hen with a larger comb.  It's still young enough to keep me guessing. 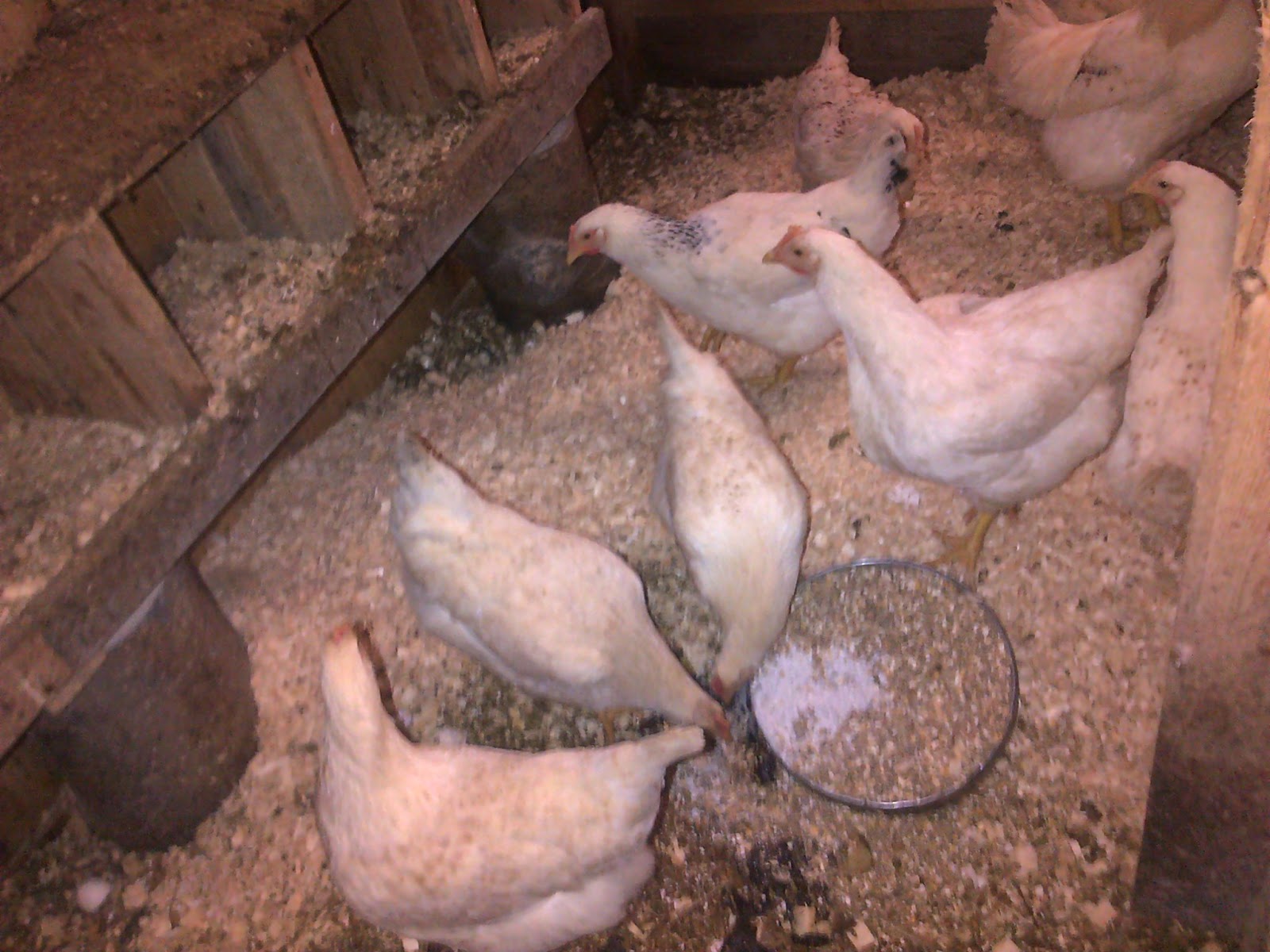 This pen will be my breeding stock, unless or until I can find a nice roo with small comb and wattle.  Hopefully a chantecler rooster unrelated to my girls. 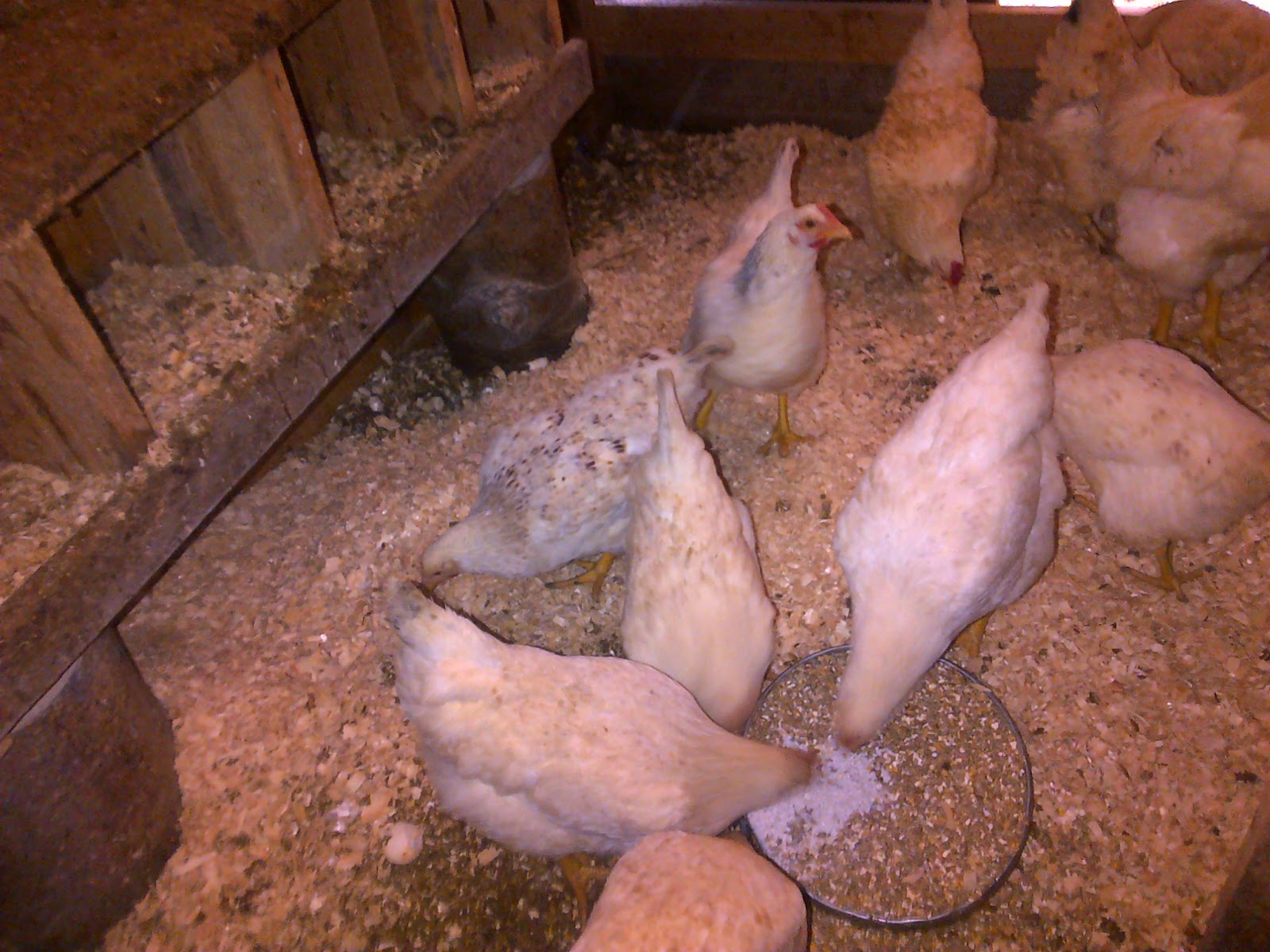 I am very pleased with my cross breeds.  They haven't started laying yet, which is one of the reasons for the move.  They all survived the winter, and compared to the other hens, almost thrived.  They are well feathered and fluffy, and heavier than all of the other hens.  No frost bite damage, which is clearly visible on some of the others, and such a calm demeanour after all of these months of being trapped indoors.  The reds in particular seem to be a little stir crazy. 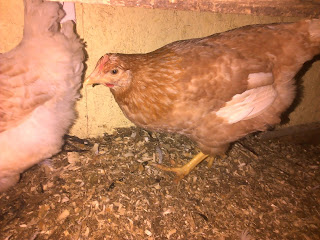 I have two buff coloured hens from the second batch of chicks.  They're healthy, heavy, and have small combs.  I didn't move them in with the whites, although I am leaning toward including them as breeding stock.  If it weren't for their colour I would have included them as chantecler crosses.  They may be, and just happened to get their colour from their dads.  It is the small combs, heavier weight, heavy feathering that I want in my flock going forward.  If that white that I'm not sure of turns out to be a hen, I may remove her, since her comb is bigger.

For now the whites are being spoiled - all of the scrap buckets with egg shells, sunflower seeds daily, fodder daily, as well as their regular feed.  I want to bring the younger ones in to lay as soon as possible.  The older girls (the moms) continued to lay through the winter.  Once I start getting 5-6 eggs per day from them I will start saving them for the incubator.

I will also split them back into two pens once I deal with the rest of the birds.
Posted by Wendy at 8:00 AM 2 comments: Links to this post

Who's Having A Baby?

Dorie most definitely looks like she won't be long now. 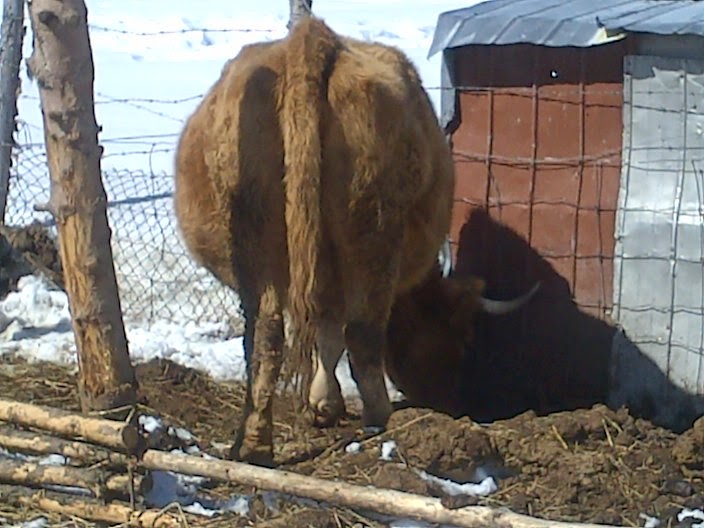 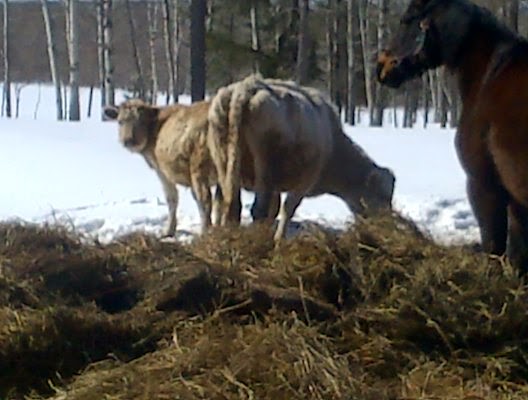 Majesty might be pregnant.  She's still quite small though, just 3 this year, and Toothless was her Daddy, so it would be preferable if she isn't pregnant. 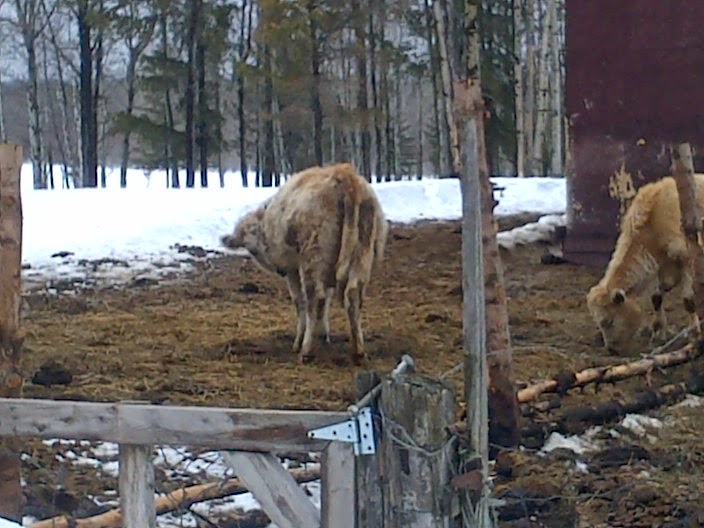 Mindy wouldn't come out of hiding for pictures, though she is looking quite large from a distance. 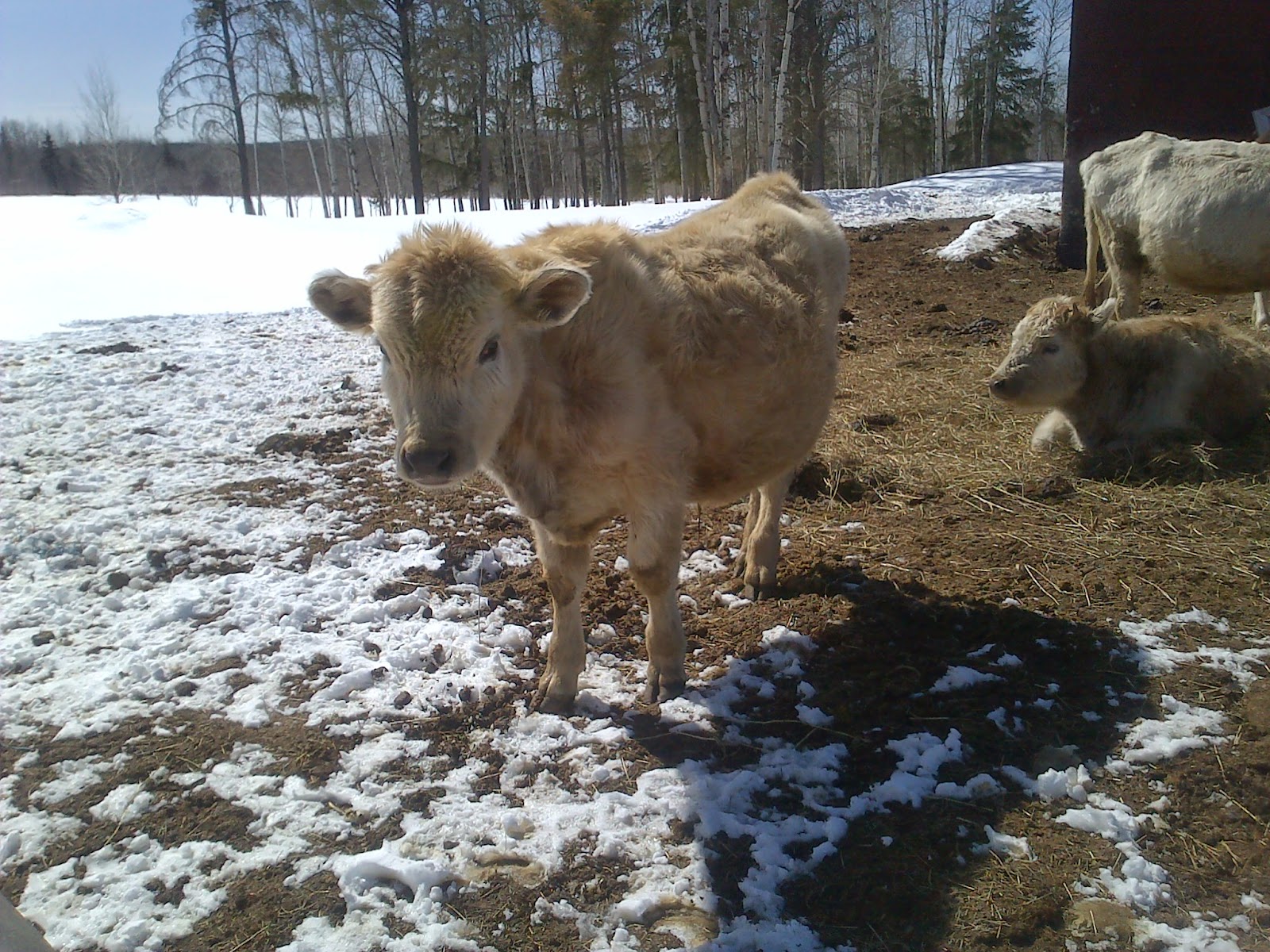