We left Nelly in the barn this year, and found this wet wee beasty yesterday morning.  #1 did the morning check and figured he missed all the action by about 10 minutes. 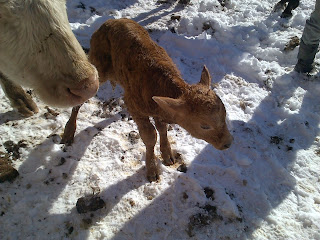 He was clean, but wet, when I got out to the barn.  He was having trouble getting up on his feet, and shivering terribly. I rubbed him down to dry him off and get the circulation going, but he was still shivering and stumbling. 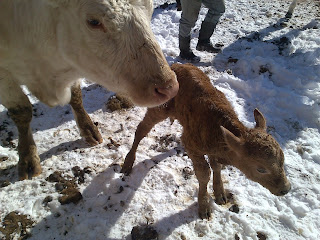 #1 scooped him up (if only I had muscles like that!  He must be a hundred pounder!) and took him outside to the sun.  I rubbed him down again, and then he got up on his feet. 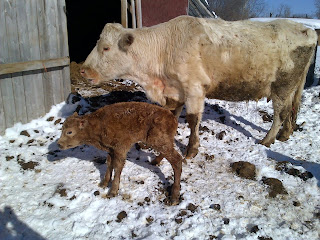 It took almost an hour to get him nursing.  Nelly wasn't cooperative at first.  We sat and watched for about twenty minutes while he tried to get under her and she kept shying away from him. 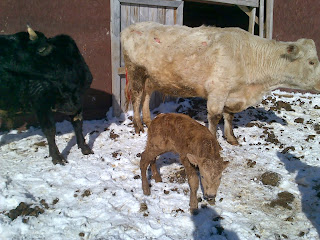 #1 decided to try milking her, and after a couple of minutes she stood good as gold.  I guess she needed to know that her sore teats from last year had recovered. 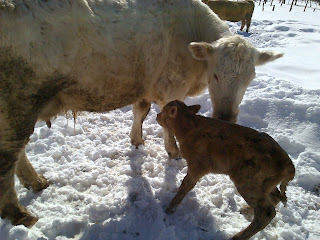 Once the milk was flowing, Nelly relaxed, and we got him aimed in the right direction, he took to nursing like a pro.  The two of them laid down beside the hay bale and napped in the sunshine.

The weather was beautiful.  We hit +4!!  So we left them in the pasture for the day.

Late in the afternoon we got ready to make the move to the milk room.  The nights are still too cold to leave him outside.

Moving him was a breeze.  He followed Nelly out of the pasture, and then followed #2 along the path we use to get to the milk room.  #2 has dubbed him Patrick.

Not so easy for Nelly.  Our path was too narrow for her and she sunk in the snow to her belly. 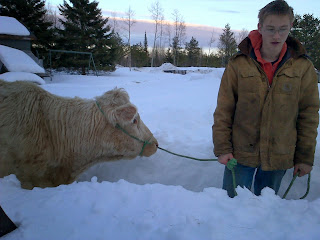 #2 started shovelling a new path (easier than shovelling the hard pack we've been walking on).  #1 shovelled Nelly out of the snow and got her onto the new path.  Husband went down to the other end to shovel, and they met in the middle.  Then Nelly walked across to reunite with her baby. 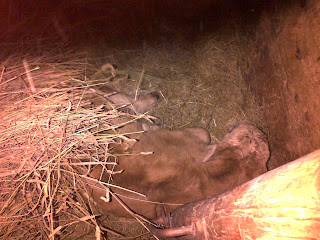 After checking to make sure he was ok- already napping in the manger, she went about eating her dinner. 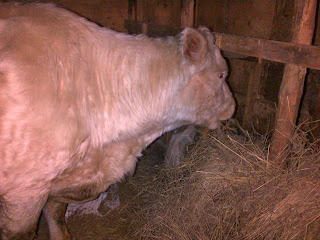 And all was well in the world.  Until the wee noise maker came out to see what was going on. 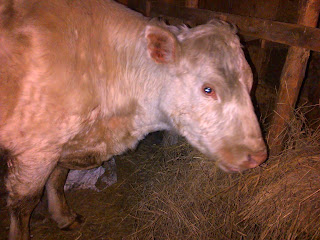 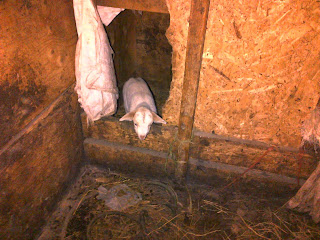 Oh!  Where did that come from?  Nelly met her new nephew. (Nelly was raised in part by Mama goat).  Life was good. 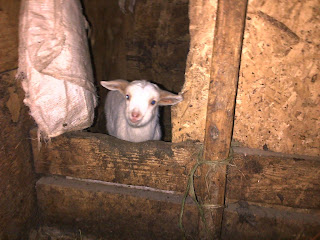 Until Sheila came charging in, climbing over top of Patrick (I don't think she even saw him), through the manger to her boy.  There was a mild scuffle between Nelly and Sheila, but then they took to opposite sides of the room and both settled down.  I suppose if my sister had climbed over top of my baby, I'd have tried to t-bone her too.

The wee billy looks just like his daddy, with just a touch of colour to him- almost like he's just a little dirty.  He's a week old and has no name!  Suggestions for the letter "P"?

I mentioned before that there's a logging company working on the crown land behind our property.  We're low on firewood.  The weather wasn't too bad- only -20°C, sunny, tiny snowflakes, so we decided to go check out where they were cutting.  The last time they cut, it was way back into the bush and they had to put a bridge in to get their trucks across.  We couldn't get to the scrap piles in the spring. 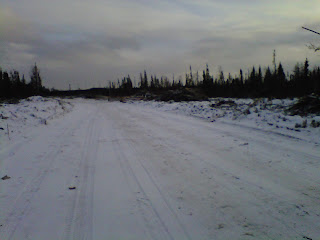 Check it out- brand new road.  It's in better shape than the road we live on- wider, too.  It's not too far in, just past the first turn off down the trail. 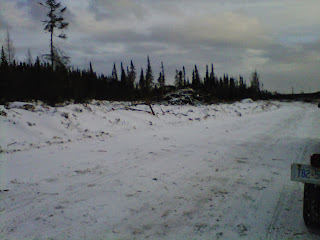 They're leaving big scrap piles off to the sides, mostly pine, and a fair bit of birch. 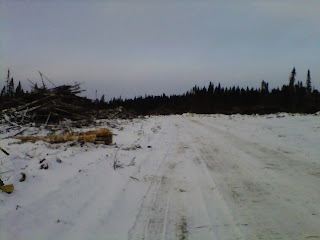 It's a lot of waste.  Easy cutting for us, and we should still be able to get to most of it in the spring. 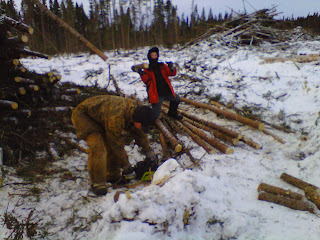 We filled our trailer twice in less than two hours. 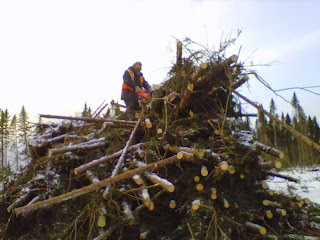 Husband decided to climb up on top and cut off logs to toss down. 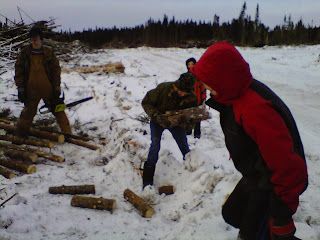 Mom came out with us on the second trip.

We barely made a dent in the first pile we tackled.

Husband talked to some of the loggers.  They expect to be finished by next weekend.  They say the new trail goes back to a small lake.

If we're lucky and don't get a ton of snow dumped on us for awhile, we might be able to keep working on it until spring melt.  We should definitely be able to get enough wood to get us through the rest of the winter between yesterday and next weekend.

Posted by Wendy at 8:41 AM 2 comments: Links to this post