After weeks of picking through the ashes of our lives, we were able to recover most of my coin collection, a porcelain smelling salt pig that was my Granny's, the first pocket knife my Dad gave me after we moved to the farm, and a bit of jewellery. 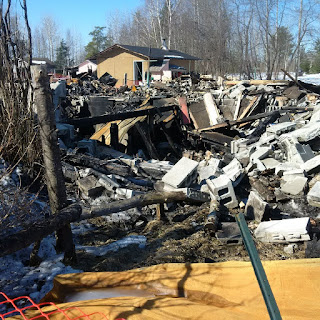 I expected to find my knives.  The Alaska skinning knife that was my Dad's, the hunting knives, fishing knives and butchering knives.  They were in an upper cupboard in the kitchen.

We found the remnants of the lower cabinets in the basement, with odds and ends of identifiable pots and pans and silverware. 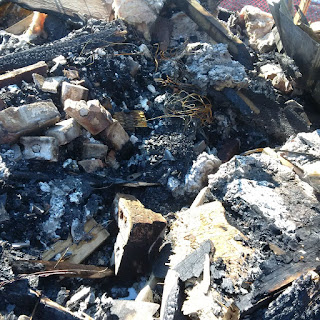 The stove was out on the lawn toward the front of the house.  Sardines from the cupboard above, to the left of it as well.  But the main kitchen cupboards with all of the plates, glasses, cups, and my knives were just gone. 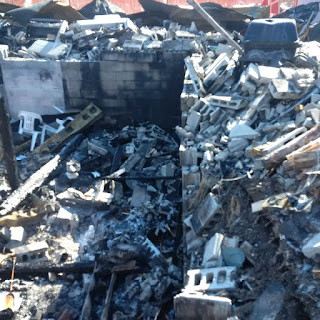 It was time to move on.  Demolition and clean up began.  Truckload after truckload of pit rock to fill the hole.  Gravel on top.  Still working on spreading it.  The old house will be the new parking area. 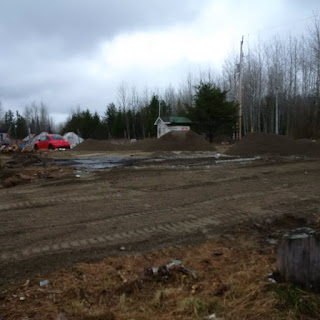 The well guys came and cleaned the well, removed the old pump and wiring (damaged by the heat), and installed new.  Yesterday Hydro finally got hooked up to the little shed.  We wanted temporary power to the garage right away, but it was too far from the hydro post, and crossed the demolition site.  No go on the coop or the barn.  Finally they agreed to the shed beside the pole, then spent another month waiting on inspections.  Husband has to connect the well to the fuse panel, and then we'll have running water again. 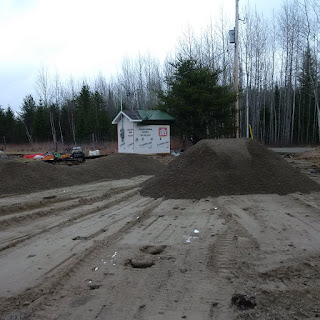 Floor plans are back with the architect.  We're on round 3 now.  Very frustrating.  I draw what I want, he messes it up...  I draw it again.  Originally I wanted a three bedroom tower.  I thought it would be hilarious to have one child on the main floor, one in the dungeon, and the "princess" in the tower.  Stairs and roofing were too complicated, and the footprint was too big.  The huge basement was getting bigger and bigger, and mostly empty wasted space.
Basement 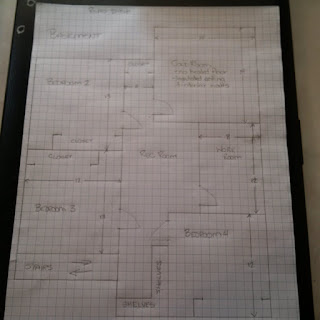 After lots of debate, we decided to put all of the boys in the basement.They each get their own rooms, the three remaining anyway, with the rec room in the centre.  The cold room is monstrous and will be under the kitchen. 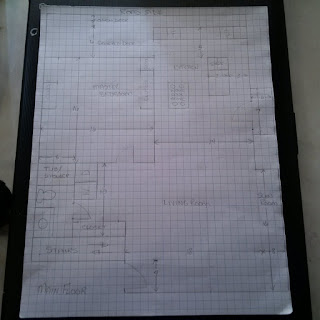 The main floor is pretty much the same as it was, except opposite and open between the kitchen and living room, and the stairs used to be between the living room and the master bedroom.  Were also moving the sunroom to the south side instead of the west.

We spent a month and a half in motel rooms, waiting for winter to end.  Then we bought the first trailer (in the middle).  It has bunk beds and a fold down couch, so technically we all fit.  It will be lovely for camping later.  For all of us to live in, it's a nightmare.  Only one person can walk at a time (no tip outs). 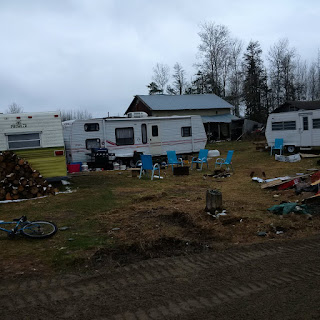 We got the little trailer for #2, and the medium (green) for #3 and #4.  Both of them had been remodeled inside.

The little one has a tiny composting toilet, a table, and a queen size bed.  It has  a small electric bar fridge (not in use), and a coleman cook stove.  The lights are all battery operated (AA/AAA - not RV battery).  It has two regular electric outlets - one for the fridge, one at the table.  Easy to plug into a small generator.  All of the previous electric/lighting/propane/wiring/etc, has been removed.

The green one also has a queen (maybe king) size bed at one end and a table at the other.  It had no mattress, so the boys are using the bunk bed mattresses from the main trailer.  There's enough space between them to keep them from arguing and kicking each other all night long.  It has a propane fridge that doesn't work, and a propane stove that might work.  They're not original, each requires a separate indoor propane tank.  Their table is a small dinette with two chairs on one side, and the original trailer bench seat on the other.  They have no bathroom.  I offered to make them a bucket toilet to use through the night, but they said they'd rather just pee outside than have to empty it in the morning.

We bought them Mr. Heater Big and Little Buddy's for heat. They work really well.

We have the fire pit set up, the BBQ, and a table for outdoor "counter space".  I still need to replace my patio table so we can eat outside when the weather gets nicer - 'cause we're still waiting for spring.  Temps are mostly above freezing now, but we're still getting a bit of snow every few days.  The winds this year have been atrocious, so we haven't put out the awning yet.