It rained off and on all day yesterday. Yeah rain! I took a much needed break from the fencing to do some work in the garden. The peas are coming up. So are the weeds. 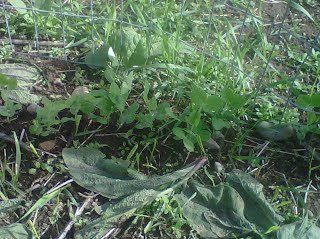 Greenhouse #2 is coming along, and so are the weeds. Most of the transplants are doing well, but I did lose a couple of cucumbers and a few tomatoes. I didn't cage all of the tomatoes right away, and I think they may have been stepped on or hit by the hose, rather than weather losses. Lots more tomatoes to transplant still, so no worries. 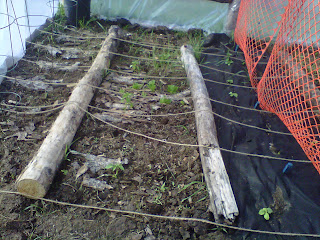 I think (I hope) that these are parsnips. I planted a row of parsnips outside of greenhouse #1 last year, but I never noticed anything come up. There are five or six of these plants in a row in the same spot now. I don't remember what the tops are supposed to look like though, and I don't want to pull the roots yet. 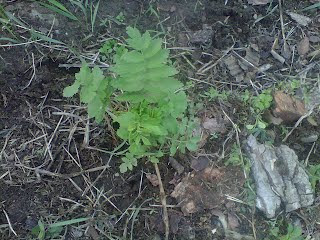 Greenhouse #1 still isn't planted! I just hung some fence for the cucumbers to climb. It's wire fence and needs some stretching to hang straight instead of curling up at the bottom. I measured off 1 foot sections with rope. I need a couple more logs for walking on yet. I transplanted cucumbers, and planted squash, beans, corn and mangels. I need more beet, radish and onion seed, and I can't find my eggplant or kohlrabi. I've got to stop leaving things on the table when I'm done for the day! 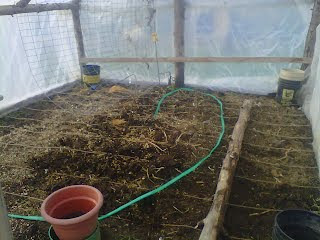 I transplanted a blackberry bush, picked some more chives to dry, pulled a bucket of weeds for happy geese. Then I went to check on the chicks and turkeys. The wee beasts need to move! I opened the door of the work shop to be greeted happily by the little buggers. 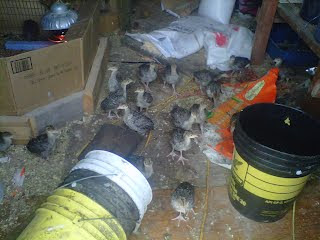 They've been flying out of their brooder box, a few at a time, for a couple of weeks now. But yesterday, they were everywhere. They knocked the cardboard off the side of the box. They were in the chick brooder, the feed bins, under the work bench, and one had found a whole in the floor and got himself trapped. 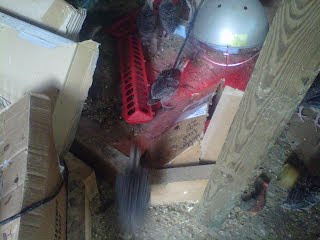 I enlisted #3 and #4 to help catch them and load them up to move to the turkey shack. 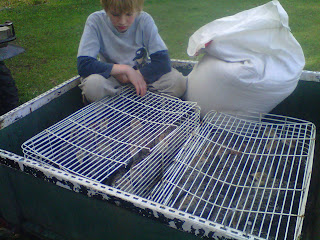 We have one duck who is mean to the other birds, and I didn't want him attacking the little turkeys, so I divided the shack with a piece of fencing. 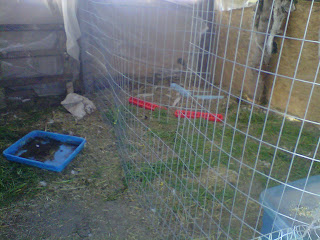 I don't want the little buggers getting loose and into the garden, so I also nailed a piece of hardware cloth at the bottom of the door. They can fit through the holes in the fencing still, but not through the hardware cloth. So they have a safe place to get away from the bigger birds, but no outside access yet. They lose their heat lamp, because there's no hydro in the turkey shack. They're pretty well feathered though, and it's been hot enough to turn the lamp off most of the time for the past couple of weeks, so they should be fine. They got a bucket of grass, and seem happy in their new home. 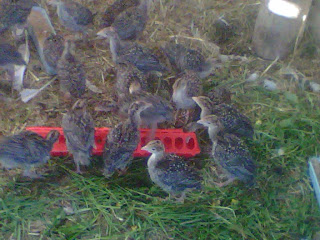 The geese are a bit disturbed by the new neighbours. This is the first batch of young for the two newer geese to raise.  The turkeys were just as big as them when I bought them last year.  Old goose has experience.  The turkey hen (who has been sitting on her eggs with no tom to fertilize them) is very interested and chatty. I wonder if she'll think they're all hers? 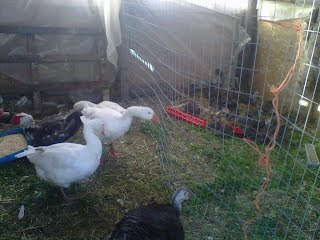 The chicks are staying in their brooder for now. They're still well behaved, and fluffy. They need more feathers before they lose their heat lamp. I think they might be Rhode Island Reds. They're quite large compared to the last couple of years. 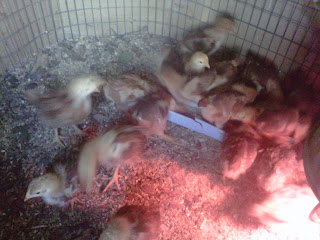