Seeds from the former owners of my parents' house. 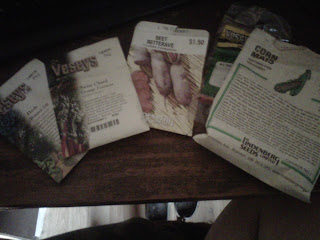 These are what my parents have chosen not to plant, dill, swiss chard, beets, and corn. The corn has me both excited and hesitant.

Northern Xtra Supersweet. Matures in 67 days!!! 67 days! Seriously? Who knew? Except, near as I can tell, it's a hybrid. Everything I read says not to save the seeds, they'll revert to one of their parents. Their parents would still be corn though, right? And surely to goodness, they wouldn't be some variety of corn that takes 100 days or longer to mature, would they?

My only other variety is Golden Bantam. 80 days to maturity, but it's an heirloom, open pollinated. So I can safely save the seed. But I can't plant both if I want to keep the seed from the Bantam. So debate time again.

It's more than possible that the bantam won't reach maturity. One late or early frost, and it won't make it. If I plant it, and it doesn't make it, I'll be disappointed knowing I could have had nice ripe hybrid corn.

On the other hand, I bought the Golden Bantam with harvesting seed for the future in mind. So why do I get myself so flustered over free seeds that weren't part of my original plan? I should just tuck them away for next year, in case the golden bantam doesn't work out.

Still, I can't help but think how far away from each other do I need to plant them to keep the seed pure? Hmmm.
Posted by Wendy at 9:56 AM