My assistant in the back field, #3. He had his work cut out for him. There's so much clay! It was very hard hoeing. 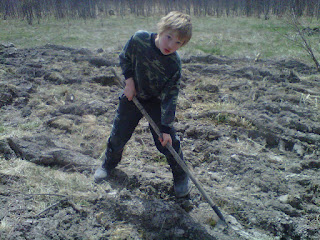 We planted a lot of pumpkin seeds. It's early yet, and we shouldn't be planting anything, but I figured I could take my chances on these. I had a jar and a half of saved pumpkin seed, some of it at least five years old. I put in 6-8 seeds in each spot. If it all comes up I'll have some ruthless thinning to take care of. And if we do get a late frost or freeze, it's really not a great loss. We put in two dollar store packets each of zucchini, and straightneck squash as well. By that time I was feeling a little overzealous, and still had space, so we put in a packet of 'Table Queen Acorn Squash' as well. That's the only one that will disturb me if I lose it. We put in saved radish and onion seed from last year. I had started some of each in the house earlier, but no germination. Then we walked up and down the rows tossing white navy beans. They're just grocery store bags of beans, nothing fancy. No idea if they'll grow, or if the birds will say thank you, yum, but if they do come up it'll be good for the soil. Meanwhile, the Bigs and #4 cut and loaded firewood. There are some dead trees just off the side of the field. Back in the perennial bed, the English Thyme is doing ok under the pop bottle, so I transplanted some nasturdium and holly hocks and covered them as well. 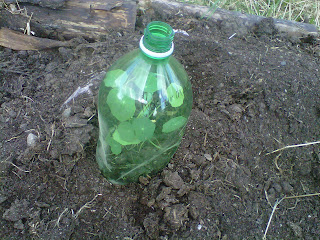 #4 got these hollow logs from Grandma last year, and she told him to plant flowers in them. He dragged them over to the perennial bed, so I told him to set them up in front of the well head and fill them with compost. They got a nasturdium and a holly hock each as well. They aren't covered, so they're at the greatest risk of loss. 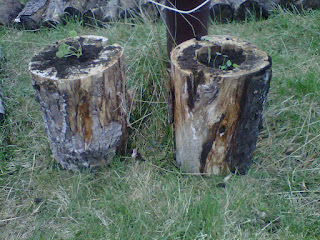 I thought it was about time to cover the remaining grass with wood and compost, and then I found a patch of something that's just come up in the last day or two. There's a lupin, and two other types of plant that I don't recognize. I'll have to keep working on it slowly.  Other treasures may be yet to appear.

We got a bit of rain yesterday, though not nearly enough.  Things are greening up slowly.