Keeping busy during three days in a row of rain really isn't too hard.  There's always the cleaning.  The cleaning gets neglected when we're busy outside.  The floors have been mopped, the dishes all washed, the boys' rooms cleaned.  But then there's the laundry... 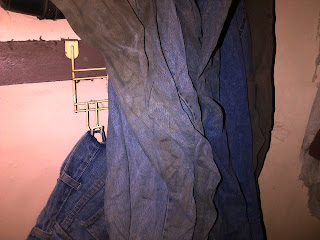 Indoor clothes drying to the rescue.  It takes a little longer, but it's free!  The heavy stuff I hang on hooks on the bathroom wall. 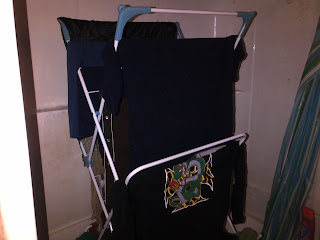 The lighter stuff goes on the drying rack.  I used this method all winter, rarely turning on the dryer at all.  I think when the dryer kicks the bucket, I'll replace it with a big wooden Mennonite drying rack.


#2 cleaned up the basement and piled the little bit of firewood we've brought in so far this year.  We ordered wood - a dump truck load of birch logs - and 5 weeks later we're still waiting.  If it doesn't come soon we will be freezing this winter!

We took a break and went to the Flea Market/Feed Store.  They've been doing a lot of cleaning this year, so now you can actually find stuff.  Before everything was so stuffed and over flowing, I was afraid to touch anything lest it fall all over the place. 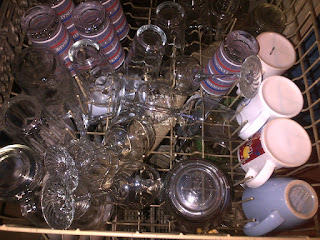 I bought a bunch of glasses, coffee cups, wine glasses, and measuring cups. 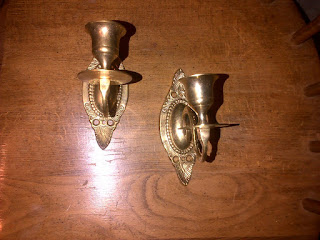 A pair of wall candle sconces. 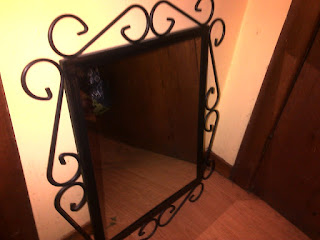 A nice big mirror - which I originally thought I would hang in the livingroom, but after bringing it home I think I will probably put it up in my room.  I would like to fill the house with mirrors to reflect more light, and I love the black metal frames.


Sadly, the Flea Market will be closing in September.  They've been struggling since the Mennonites moved into the area and opened their feed store.  They're more centrally located, while the Flea Market is out here on the edge, like me.  The owners bought a general store in one of the smaller towns to the south, and their parents and son have been running the Flea Market this summer.  I'm hoping they will return in the spring.  I suggested they turn it into a Flea & Farmer's market.

I went to a Farmer's market last weekend in one of the bigger towns to the north.  I was just killing time, waiting on the boys, and already halfway there, so I thought I'd go take a look.  It was truly unbelievable.  Most of the vendors were selling hand crafts.  There were two vegetable vendors, both with outrageous prices, and both very busy!  $2 for a cucumber, $3 for a small bag of lettuce, $4 for a tiny romaine.  $3 each for cauliflower and broccoli the size of my fist!  $3 for a tiny bunch of carrots, $4.50 for a pint of raspberries, and $4 for a tiny dish of blueberries.

I admit I don't often buy any of that stuff, since I grow my own, but still, I was astounded by how busy they were.  I looked in the grocery store afterward, and sure enough, their prices were dramatically lower.  I regret not going to the farmer's market when I was down south.  It would have been interesting for comparison.

Don't get me wrong, I don't begrudge the farmers earning a living wage.  I just don't understand where their customers come from.  I remember going to the farmer's market with my parents, always looking for deals.  We shopped there because it was cheaper than the grocery store.  We would get a deal by buying in bulk, and then Mom would can and freeze for winter.  If I had to pay $6 for a little basket of pickling cukes, I'd just buy pickles in the grocery store.  It's cheaper and the work is already done.

On the other hand, if I sold my carrots 6 to a bunch for $2.50 (grocery store price), I could make close to $200.  That's pretty impressive for my little companion plants.  Then I start thinking about all of the extra stuff I could grow...  and then my garden is huge again and I can't keep up with the weeds...  Maybe someday.

At any rate, I think devoting some of the parking lot space to a farmer's market would help draw people in to the Flea Market, and help keep them afloat. 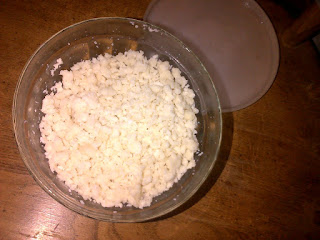 I made another batch of butter, and a small batch of Farmer's Cheese.  That will be used in a lasagna tonight, as it's not too hot to have the oven on today! 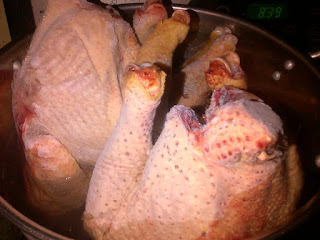 And while it's cool, I also thought I'd make a little room in the freezer.  These three birds are simmering on the stove and will be ready to can this evening.  When we raised turkeys I'd always save a little bit for future soups, pastas, and salads.  I rarely get to do that with chickens, since they're gone in two to three meals.  I catch myself looking at chicken parts in the grocery store, thinking I should buy something to make taco pasta.  It's just not the same with beef.

The garden has been left to fend for itself.  The weeds will be growing like mad again next week.  I still go out to the greenhouses daily, and I've picked my second batch of green beans.  I'm still getting a few peas, carrots every day, my first tomato!!, nasturtium flowers, peppers, and a couple of missed radishes.

I pulled a few turnips from the garden yesterday, for Piggy and to thin them, but we ended up eating them ourselves.  #2 had asked what to make for supper since we were almost out of potatoes, and I told him I had carrots and turnips on the table.  I found him in the kitchen chopping them up.  He made a pot of mixed veggies - carrots, turnips, and potatoes.  They were delicious.  Piggy got the leftovers for breakfast.  I'll go out and pick some more roots for her once the rain eases off a bit.

I also cooked the turnip greens.  That was a first for us.  I just shredded and boiled them, served with salt and butter.  They were nice.  I've been looking at canning greens for winter.  Everything I've read says 90 minutes for processing, and they turn out like mush.  I really don't have a lot of extra freezer space right now, but it seems that that's the recommended way to go.  I'm thinking that 36-52 bags of assorted greens would be sufficient for winter.

So, back to work now.  Enjoy the rain!