It's that time of the year now.  The garden is in full swing, the rush is on to get everything done before fall, and only one week left until school starts! 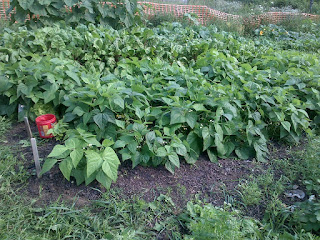 I am so pleased with the garden.  Even the back half is catching up.  It's kind of funny how I've been so focussed on how poorly the back half was doing, rather than on how well the front half was doing.  In truth, the back half has been doing almost exactly what it has done for the past eight years.  All of those tiny plants will be harvestable, but not great, before frost.  I should have been more focussed on how great the front half is, and given myself credit for finally getting the soil amended to produce like this, instead of looking at the back as a failure and a short coming.  I see it now! 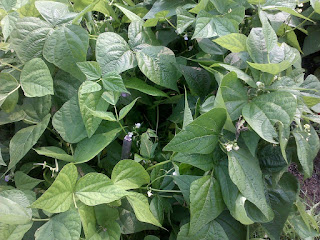 The beans are producing like crazy, and I love and curse them as I pick them.  I love them, they are my favourite vegetable, and the only vegetable I really ate for years.  But I curse them as I'm picking and my back hurts, and I look up and I still have another half row to go...  and I'm thankful that there are only two and a half rows growing, and two short rows in the greenhouse, rather than the six or eight rows I used to plant!

I am seriously considering switching to pole beans in the future though.  #2 and I were discussing it the other day.  Getting the pea fence in before the peas come up is always an ordeal- they're heavy with four log posts and metal fencing, and require more space to walk between once they start to sag from the weight of the peas.  Pole beans would need more fences.  He suggested permanent posts at the end of the rows, and removable fencing or ropes between.  Intriguing.  That could work.

So my question to all of you- what types of pole beans produce long slender pods, taste like green beans, and grow well in a short, cooler season?  What are your favourites and why? 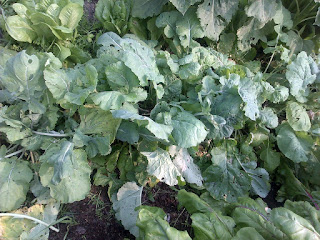 The turnips are growing fairly well, though most have long thick roots rather than bulbs. 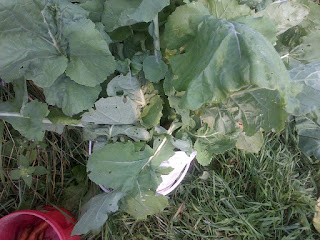 I'm pulling 6 to 8 plants per day, intended to be pig feed, but I can't help but add a couple to our meals as well.  They're just so sweet and tender right now.  We're also eating the tops as greens.  They aren't any of our favourites, but they're ok.  Mostly, I think the issue is just that they're a little tough.  The longer I cook them, the better they taste.  Maybe the canning idea might not be so bad after all.

The greenhouses are looking better and better each day.  Sunflowers are flowering, cucumbers are climbing and little fruits are growing.  Melons are forming, romaine is making heads, and carrots are getting bigger and bigger all of the time. 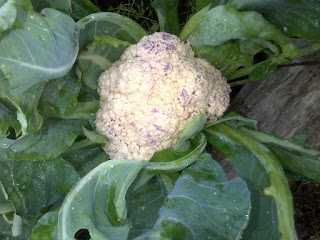 We ate one of the cauliflowers.  This is the one still in the greenhouse.  It's just starting to get a little purple into it.  I think it's cool, the boys think it's weird.

The one broccoli plant is continuing to produce what seems to be side shoots, without ever really producing a main head.  Cabbages are getting big and beautiful, making me half want to harvest them now, and half want to leave them be to see how big they'll get.

I trimmed off some brassica leaves- the finished cauliflower, some broccoli, and Brussels sprouts- and cooked them for supper one night.  Again, far too tough, almost inedible.  I'm debating leaving them for frost to see if they improve, or just canning a bunch to see if the long cooking time makes them edible.

Hungarian sweet banana peppers are doing well, and I enjoy them.  There aren't many though, and I don't like to share.  The long slims (hot) are producing real well- they're for the boys, and for making salsa and sauce later.  The California Bells have yet to produce a single pepper.  The plants are big and healthy looking, and they've flowered well, but no peppers.  Notes for next year- skip the bells, only 3 hot peppers, and plant more sweet Hungarians. 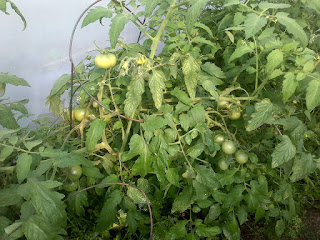 And then there are the wild tomato trees.  One thing I really notice this year, is how useless tomato cages are.  I know my cages are old, most are small, and I'm far to cheap to buy new ones, but I've never had so many plants just knock the whole cage over before.  I've been tying baler twine on the greenhouse beams and looping it over tomato branches here and there to keep them mostly upright.  Lots of green tomatoes now, getting bigger every day it seems, and the plants are still flowering.  I'm ruthlessly pinching suckers and lower leaves. 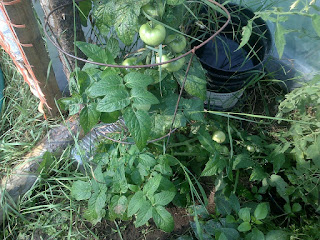 One of the great mysteries of life in the garden (or is it life in the north?) are these two weird tomato plants with fat leaves.  I don't know what varieties they are.  The plants are compact, mostly within their cages, and short.  They never seemed to be doing particularly well.  They have a fair number of tomatoes on them, but aren't over loaded. 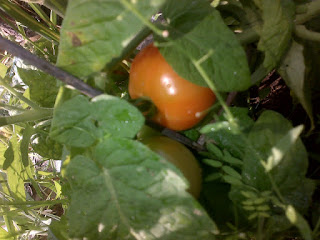 But nestled under the leaves, they both have tomatoes turning orange, and I've even picked three already.  They're small to medium sized, nicely flavoured, more meaty than juicy.  It would take at least two of them to make a tomato sandwich, but by golly, they're ripening in August.

I'm saving the seed from them, but I don't really know if I'd be happy with a greenhouse full of them.  At one time I'd have rejoiced for ripe tomatoes in August (and I am enjoying them), but since I've learned the secret of green tomato salsa and summer sauce...  I'm not sure that they would be abundant enough for winter storage.

I do think it's time that I started 'sorting' my saved tomato seed though.  I usually just squeeze juice and seeds from assorted tomatoes into a glass jar and write the date on it.  In the spring I  plant a mixture of saved seed, as well as several varieties of seed still in my seed box.  This is the first year in about six that I have no roma type tomatoes at all.  So I will keep these short, potato leafed, early ripening tomato seeds separate from the jungle inducing monsters that crowd the greenhouse.

Still no quads, and the truck has had a few hiccups, so we're still not into the swing of firewood.  The wood we ordered has not arrived.  We strung semi permanent electric fence on the hill behind the house, #3 cutting a trail through the brush and bramble.  He's becoming quite the young man.  A little bit of wood from there.  Brother is up visiting and he and #2 have cut a bit and piled logs at the house.  There's more to cut in the new pasture, which fortunately is close enough to the house to drag up in chunks.

Raspberries are winding down now, blueberries are picking up, but neither is high on priority this year.  Choke cherries are ready to start picking and will be made into wine.

Manure clean up is also still behind, with no suitable transportation.

It feels somewhat overwhelming to be so far behind and not have a plan of action in place.