Round three I used the starters as half flour/half water in a grandmother bread recipe. Along with the commercial yeast they turned out ok, almost like regular grandmother bread, but with a bit of a spongier crust.

I fed the starters, and I saved an additional Dawson starter with commercial yeast in it.  While that's not ideal, I was curious to see if I could keep the commercial yeast alive in this way.

I tucked the three jars up in the cupboard, and discovered an explosion the next day.  The potato mother definitely doubled.  Progress.

Round four I had planned to follow directions with all three starters, but I had almost no bubbling in any of the three in the pancake phase.  The potato mother surprised me most of all.  Since I knew it had doubled, I expected it to be ready to use.  Then I thought maybe the yeast was the part I had cleaned up off the cupboard.

I decided to cheat, just a little.  Just before mixing in the remaining flour, I added a teaspoon of old yeast, from a jar that I had stopped using over a year ago because my bread wasn't rising properly.  I was hoping it would give them enough of a boost to make edible bread. 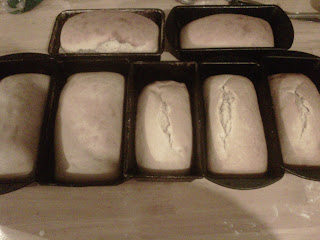 The Dawson bread was gooey on the inside with playdough smell.  Bird food.

The Dawson with commercial yeast- edible, but has an odd aftertaste.

The potato mother bread is edible, nice holes forming inside, but the top of the loaves all cracked.  I probably should have left it alone to do it's thing.